Tanker Ships – How Much Do You Know About Them? 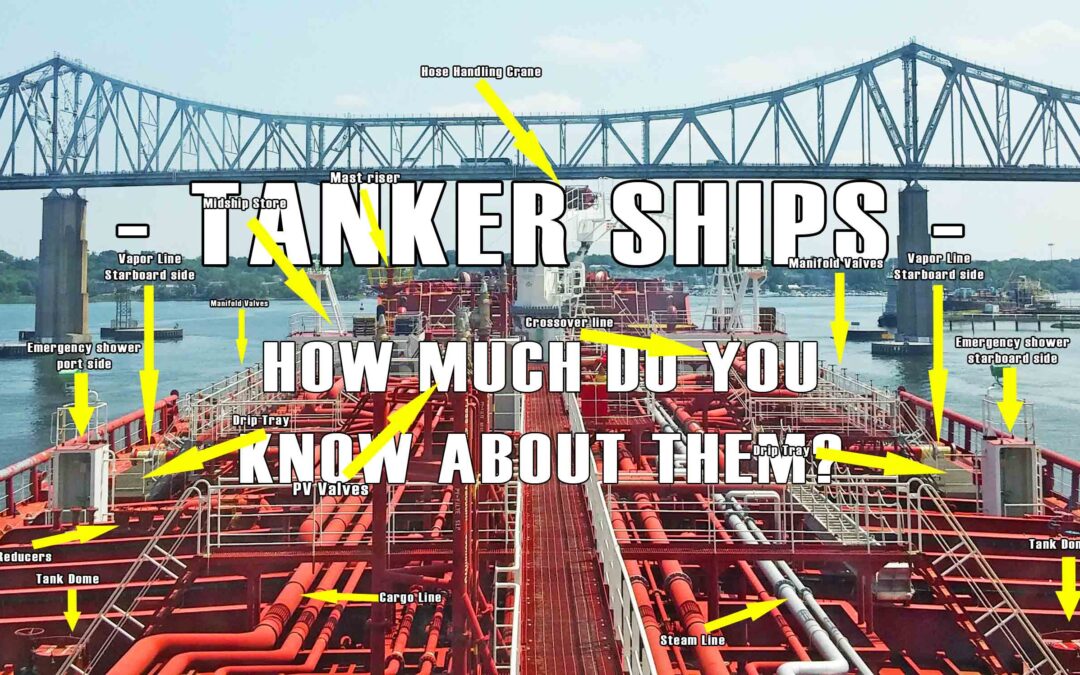 Tanker ships or commonly known as “tankers” in the maritime world, are special kinds of vessels designed to carry liquid cargoes in bulk.

Anything of liquid form can be transported through these ships. Since there thousands of various liquid goods out there, there are also many types of tankers built.

Consider this as a supplement to your tanker training courses.

This is the area where cargo is stored. You can easily spot this on a tanker ship as this much of the deck area that you see.

Since there could be as much as 50 tanks in a single tanker, naming the tanks are in alphanumerical form and whether it is at the center. 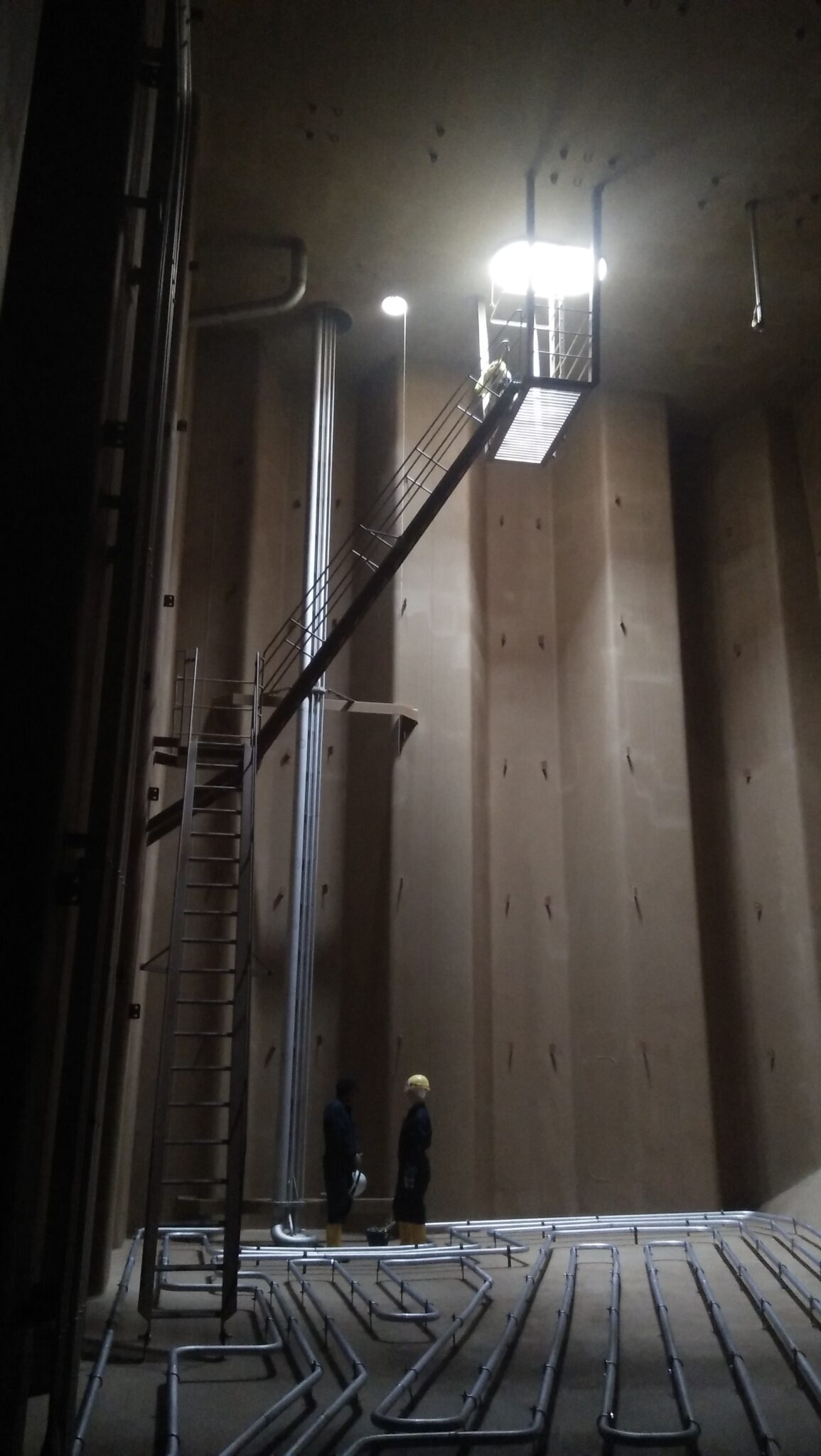 Inside of a cargo tank. We can see here the cargo pump, heating coil, tank cleaning machine and the crew inside.

Cargo pumps are used to drive the liquid cargo out of the ship during discharging operation.
Depending on the kind of ship, some uses submerge centrifugal pump while others use the old conventional models.

For submerge pumps, the most commonly used is Framo Pumping System- hydraulic driven and Marflex System which is electric driven.

Other types of pumps used in the market are reciprocating pump, gear pump and screw pump.

Cargo lines serve as the pathways to which the liquid cargo passes during loading and discharging operation.

Its direction is controlled by cargo valves which is operated by the officer of the watch.

Cargo valves allow and disallow the flow of liquid when the pump is running. It also serves to control the direction of the cargo as well as its rate of flow inside the tank.

Some cargo tanks share a common line with others. You can control which tanks to use by opening or closing the right valves.

Cargo pumps, lines and valves are one of the most basic feature of a tanker ship.

Is an office inside the ship where the Chief Officer and Officers of the Watch monitors everything.

The CCR also establishes connection to the shore terminal. 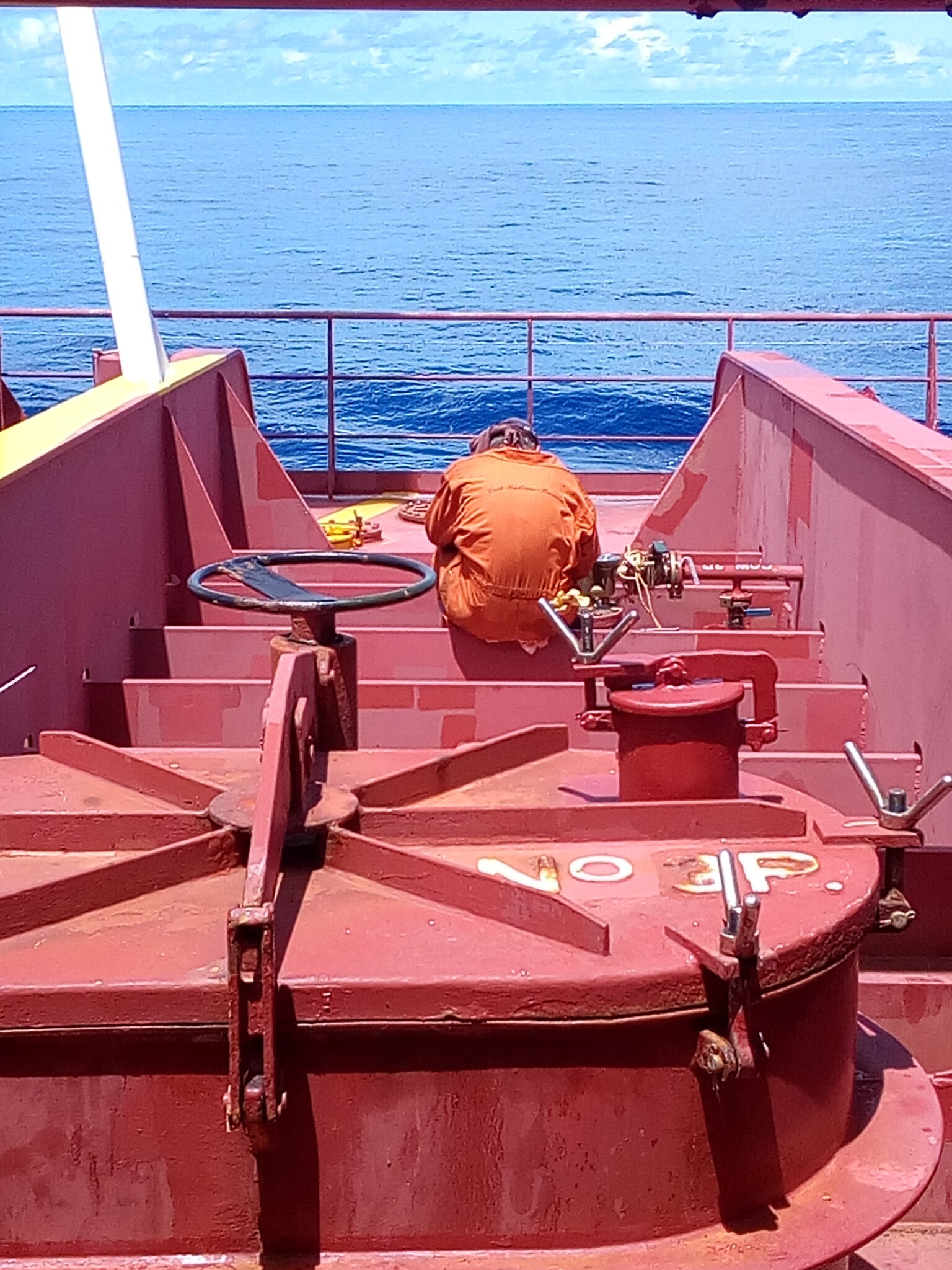 A small opening where crew can go in and out of the tank. Equipment can also be lowered here with a rope.

Various pressure of immense force are present during liquid transfers. For this reason, venting system is installed on tanker ships.

When there is too much pressure inside the tank, P/V Valve automatically opens its pressure valve. But if the pressure reaches a certain negative number, its vacuum valve opens.

Another venting system for tankers is the mast riser.

If you have a homogenous cargo and the terminal allows you to vent into open atmosphere, using the mast riser is one way to do it.

You can control the rate of flow of venting by adjusting the Mast Riser valve.

Another secondary venting system is a P/V Breaker which you can find on deck.

This is a cylindrical piece of equipment which is filled with water and is connected to the IG line.

Before the inert gas is delivered into cargo tanks, it must pass first in a deck water seal.

Deck seal, as most commonly referred to, is an equipment used to purify or wash the IG before being delivered into the tank.

More importantly, its function is to prevents backflow of toxic gases coming from the cargo tank to the engine room. 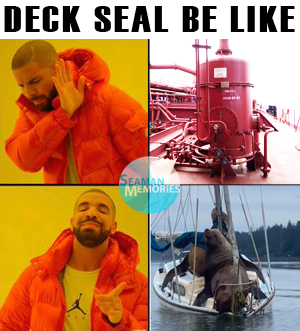 The IG line is further branched into smaller pipelines going to individual tanks.

These lines are called IG branches or IG Local and are connected to the tank using a valve.

Some terminals doesn’t allow venting into the atmosphere. Thus, the vapor coming out of the ship’s tanks during loading operation is returned back to the shore facility using a vapor return line.

The ship’s vapor line has its own manifold and is connected to individual tanks. A flexible hose is connected here that leads back to the terminal.

Some tankers uses inert gas to reduce the oxygen content inside the cargo tank. They use an equipment called the inert gas plant to do it.

This plant produces a low oxygen gas which is delivered on deck via I.G. pipelines. The lower the oxygen inside the tank, the safer it would be from fire or explosion.

Since Inert Gas is considered “dirty” and highly incompatible to other cargoes, a nitrogen is used as a substitute.

Thus, some ships like Gas Carriers, Chemical Tankers and Reefers are built with Nitrogen Generators.

Nitrogen gas or N2 is used for purging, padding and inerting.

Midship Store is not a sari-sari store where you can buy something for retail. In fact, it is a storage area where you can find various equipment most of which are for oil spill control.

Fire extinguishers, BA sets, Emergency Cargo Pump are a few that you can find here.

This is a manifold crane used for lifting heavy objects on deck like reducers, cargo hoses, portable gangways, motors and yes, even your luggage upon signing off.

Hose handling crane offers the best way to identify a tanker ship even if its far on the horizon.

A tanker terminal may be able to handle various sizes of tanker ships. Its loading arm or cargo hose connection at the manifold may not fit with that of the ship.

For this reason, ships carry with them manifold reducers to be able to connect with the shore.

Remember that if the shore can not connect their loading arm with the ship, there will be no cargo operation to conduct.

One reason why there are very strict rules around the tanker market is because of oil spill.

A drip tray is a huge and long basin built directly under the manifold to capture any drops or leaks in the connection.

The manifold area is one of the most prone for spill accidents since this is the part where connections and disconnections happen.

There would always be drops if not liters of cargo remaining in the hose or arm. The drip tray is built  to capture them.

Sometimes, the main pump fails for some reasons and the ship’s crew are unable to fix it.

To discharge the remaining cargo, a portable cargo pump is lowered inside the tank. This pump is much smaller than the main ones. Thus, it would take longer to finish the operation once this is used.

An area on a tanker ship (port and starboard) where cargo connections for different cargo tanks can be found.

It is easily spotted as it is mostly at the center of the ship, easily reach with the hose handling crane and built with a drip tray underneath.

\As cargo tanks aren’t enough, deck tanks can also be installed on deck. These are huge cylindrical tanks that you can see on the deck of a tanker ship.

They can be filled with cargo or dirty water too.

Cargo and ballast tanks are enclosed spaces. Toxic gases and low oxygen content is expected inside the tank.

To remove these hazards, the tank is normally washed and ventilated. Ventilation is the process of introducing fresh air inside the tank to remove any toxic gases present.

This is done with the use of gas freeing fans. They can be operated by water, hydraulic, steam or air. 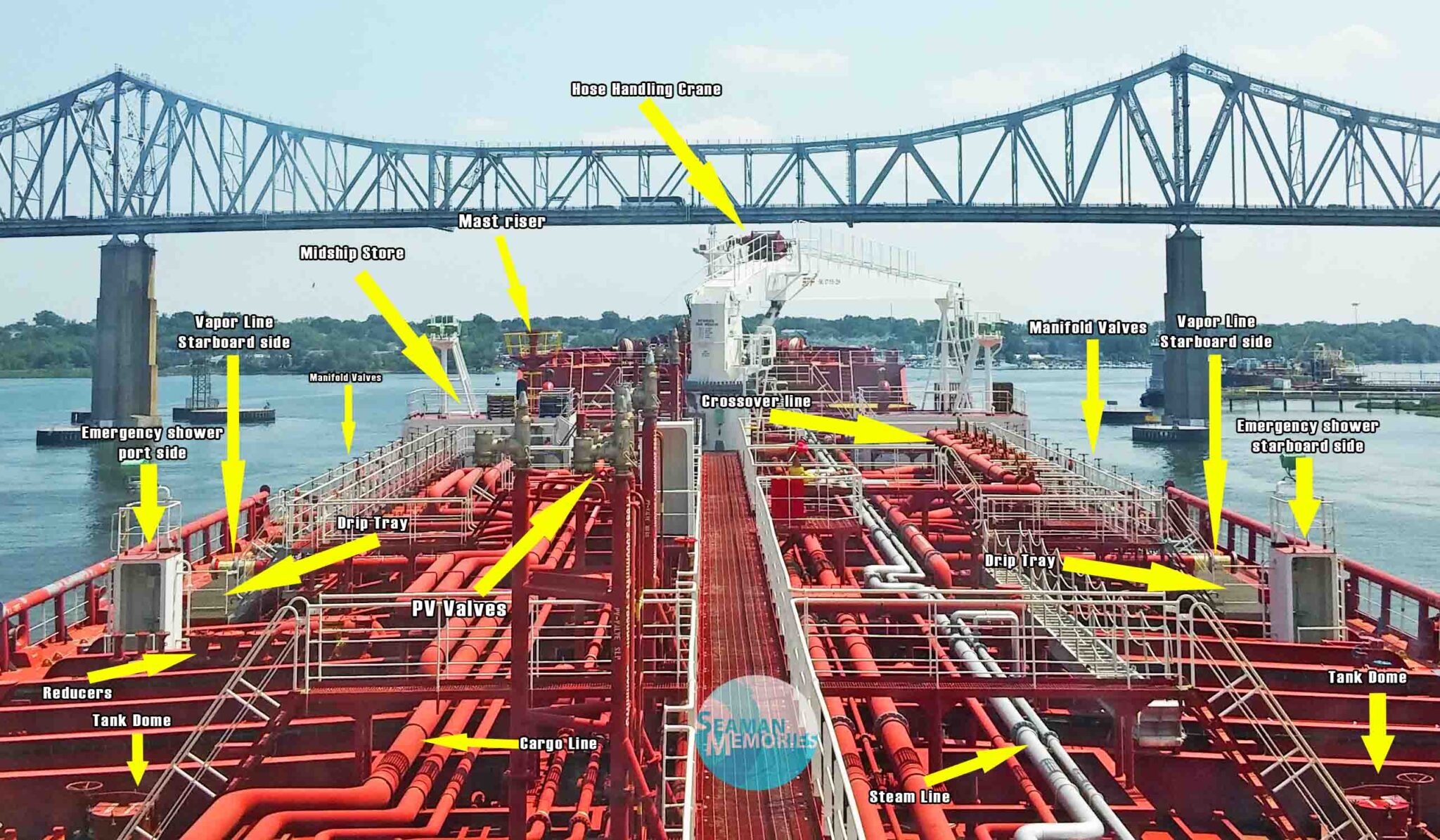 Main deck of a tanker ship and its parts.

To monitor the level of cargo inside the tank, a ship is installed with a tank radar. This is a fixed tank gauging equipment which is very useful to avoid overflowing by giving various and very noisy alarms.

This tool has sensors connected to the computer in the CCR where officers can monitor everything.

Sometimes, tank radars fail, become unreliable or or are not as accurate. To compensate for their shortcomings, a manual Hermetic or MMC Type UTI is used.

This is a gauging device which produces an audible alarm when it touches liquid cargo. The reading on its tape allows you to determine its ullage. This equipment also helps in detecting interface or water within your cargo.

Is a protruding pipe found on top of every tank. It is where the sampler and UTI is connected.

Other names include sampling point or vapor lock.

Oil spill is one of the riskiest part of a tanker operation. To give audible and visual warning about the tanks cargo levels, cargo level alarm system is placed.

High Level Alarm triggers at tank’s 95% capacity and Overfill Alarm is at 98%.

These are pipelines where steam passes through that eventually heats the cargo inside the tank.

Heating coils are found inside the tank. Meanwhile, there are other heat exchangers built on deck.
These are used when carrying high viscosity cargoes, vegetable oils and animal fats.

On some tanker ships, steam is very important on deck. They can be used during tank cleaning and maintaining the temperature of the cargo.

Steam is delivered on deck via steam line which is connected to the Engine boilers. It is where the steam is produced.

Some cargoes are not compatible with the previous one and to remove their traces, the ship conducts tank cleaning operation.

Fixed tank cleaning machines are built on deck with its nozzles inside the tank.

The nozzle rotates when high pressure water passes through hitting the bulkheads inside the tank at 360°.

Sometimes, fixed tank cleaning machines aren’t enough as there are blind spots inside the tank.

To compensate for this inefficiency, a portable machine is lowered.

This machine is connected to a hose and is lowered at different heights via the butterwash or main hatch. 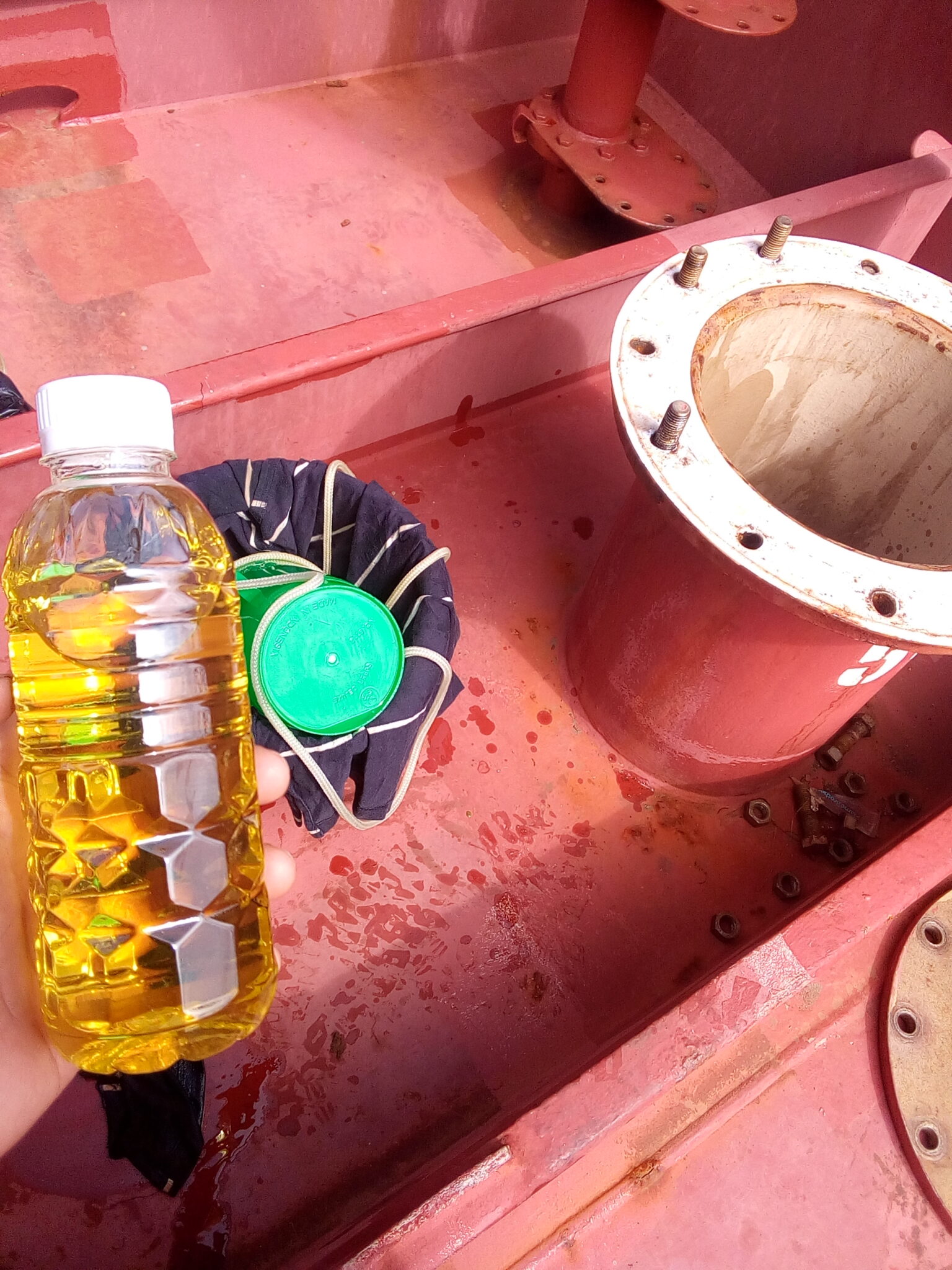 Open sampling using the Butterworth Hole or Butterwash. The pipe you see with two open flanges is the I.G. branch.

A much smaller opening where blowers are mounted to ventilate the tank. This is also used for open sampling i.e. vegetable oils.

This is normally fully secured with bolts and nuts (airtight/ watertight integrity).

Since tanker ships carry dangerous liquids, there are emergency showers installed on deck to wash them off.

These showers provide first aid relief whenever a crew gets in contact with chemicals anywhere on his body.

Also installed together with the shower is an eyewash built for chemicals splashed in the eye.

Crazy things sometimes happen on board that we immediately want to stop the cargo operation. If this happens, emergency stops come in handy.

These are push buttons installed on catwalks of tanker ships that is used in case of emergency like oil spill, leakages or overflowing

There are also emergency stop inside the CCR.

Tanker ships carry cargoes which can be harmful to the environment like oil and other chemicals. Retention tank is a small tank used to dispose dirty water so it doesn’t get thrown to sea.

Yes we do have slop tanks but there are instances that slop tanks are filled with cargo. Thus, when we have oily water waste on deck like the spills at the drip trays, these can be pumped into the retention tank.

Except pure chemical tankers, oil and product tankers use crossover lines to let the cargo pass from one line to the other.

When the ship is loading or discharging at a certain port, its most possible out of 6 or 7 manifolds, only 1 or 2 may only be used for connection.

A crossover line enables the possibility for the other tanks to be used by interconnecting it with one another. To put it simply, it is a pipe bigger than the cargo line to which all tanks are connected with each other.

They are segregated from each other using valves.

This list is not exhaustive and there could be a few equipment not listed here to which you can find in your respective tanker ships.

Just a quick trivia: Greece, the largest ship owning country, own tankers in their fleet.

Keep safe on your jobs and