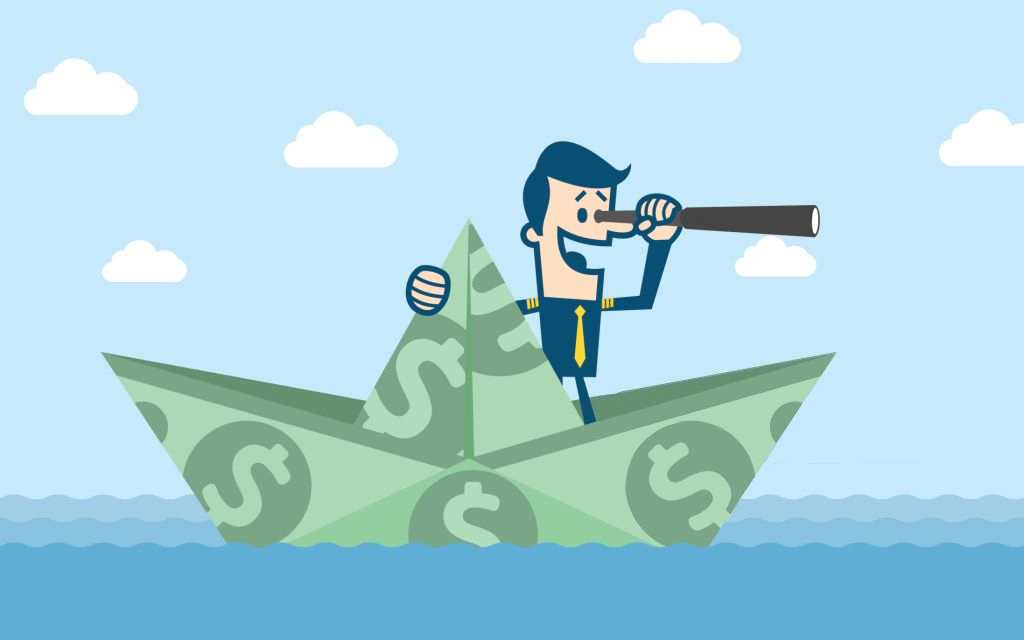 A seaman’s salary is one of the most mysterious, well-hidden and sought after figures to many people. In fact, we are one of the highest paid workers around the world. Our salaries on a per month basis are much bigger compared to other land-based professions.

I’ve been sailing with different nationalities and I found out that we all share this same privilege.

Overall, the offshore industry enjoy the biggest wage. The highest pay a seaman could receive is USD 1,000.00 PER DAY! You have to be a Master Mariner on a Jack-up Barge to earn that.

On the other hand, the average salary of Masters and Chief Engineers is around USD 12,000.00.

Now, we are going to tackle this very juicy topic. Since there are many kinds of ships out there, we will focus on varieties of tankers and dry cargo ships.

Tankers are one of the most dangerous ships many seafolks consider. But the risk is rewarded proportionately well. Since there are many different types of tanker vessels, its a bit challenging to pinpoint the exact wages offered for each kind.

I took the liberty to layout and compare 4 tanker types. Feel free to browse if your pay is within what the industry is giving. This does not only cover Filipino seafarer’s but also include the wages of other nationalities.

Here are the monthly salary of seafarers in tanker vessels. 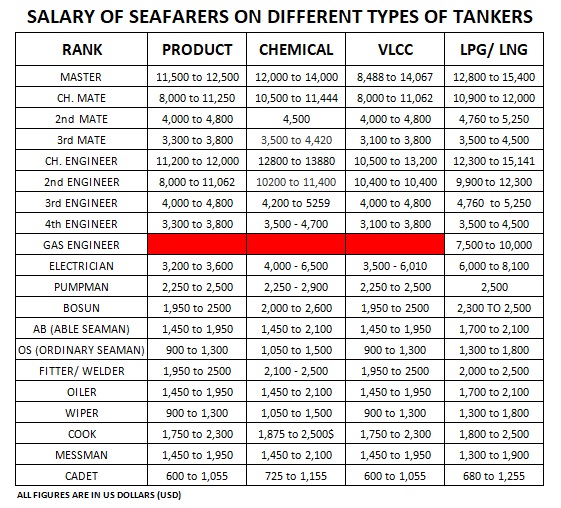 Numbers here could be more or less than the actual amount offered by different companies. Factors such as overtime payments, bonuses and other extra incomes may offset your salary.

Bosuns, Pumpmen and Fitters usually have the same salary brackets.

Though the Chief Mate has the highest rank in the deck department, his income is slightly less than that of the Chief Engineer. His salary counterpart in the engine department is the Second Engineer.

Most Captains enjoy a five figure pay every month. Cadets on the other hand, are the lowest paid crew on board.

However, there are ships which favors giving extra allowances to cadets in the deck and engine department. This is in the form of cash incentives from excess OT payments given by the crew- ratings and/ or officers.

I experienced that privilege when I was a deck cadet. Our Chief Officer always adds extra overtime hours to Bosun, 2 ABs and the Ordinary Seaman (OS). Since we are working with an open overtime system, they will then give me extra dollars that would collectively reach USD100.00 every month!

This is on top of some extra treats they (Ratings, Junior and Senior Officers) gave me during shoreleave.

Tankers are not the only ships around. There are still hundreds of different kinds of vessels but this time, I only selected a few of them for illustration purposes. 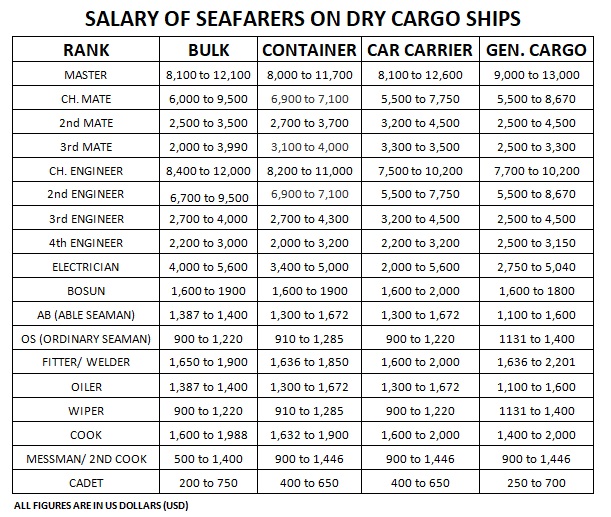 I researched the sources of these figures from various online communities, internet sites, conversations and collective bargaining agreements found over the world wide web and company websites. The wages here are based on actual job postings and may change anytime.

When comparing the salary between dry carriers and tanker ships, the latter usually is higher. But there are companies who offer very competitive rates on bulkers. For officers and engineers, the difference between those two ships could range from USD300 to USD1,000 a month.

By salary alone, you could probably identify which type of vessel is the best to work at.

The Committee reached an agreement last November to update the minimum wage for an Able Seaman (AB) by USD 27.00 over the next three years. That’s an increase of 4.5% on the current rate of USD 614.00.

The committee will implement the increase as follows:

It must be noted that the increase applies to the basic pay. At the start of 2021, the minimum basic wage for Able Seaman is USD 641.00

Who Sets the Minimum Wage?

Despite having the same ranks and type of vessels, our salary could vary slightly but other times greatly. We often find fellow seafarers jumping from one company to another looking for bluer oceans.

We also envy other nationalities over our own. Europeans and American mariners tend to have bigger pay than their Asian counterparts. Even if the job is the same, the salary range could differ a lot.

But who is setting the minimum wage standards? 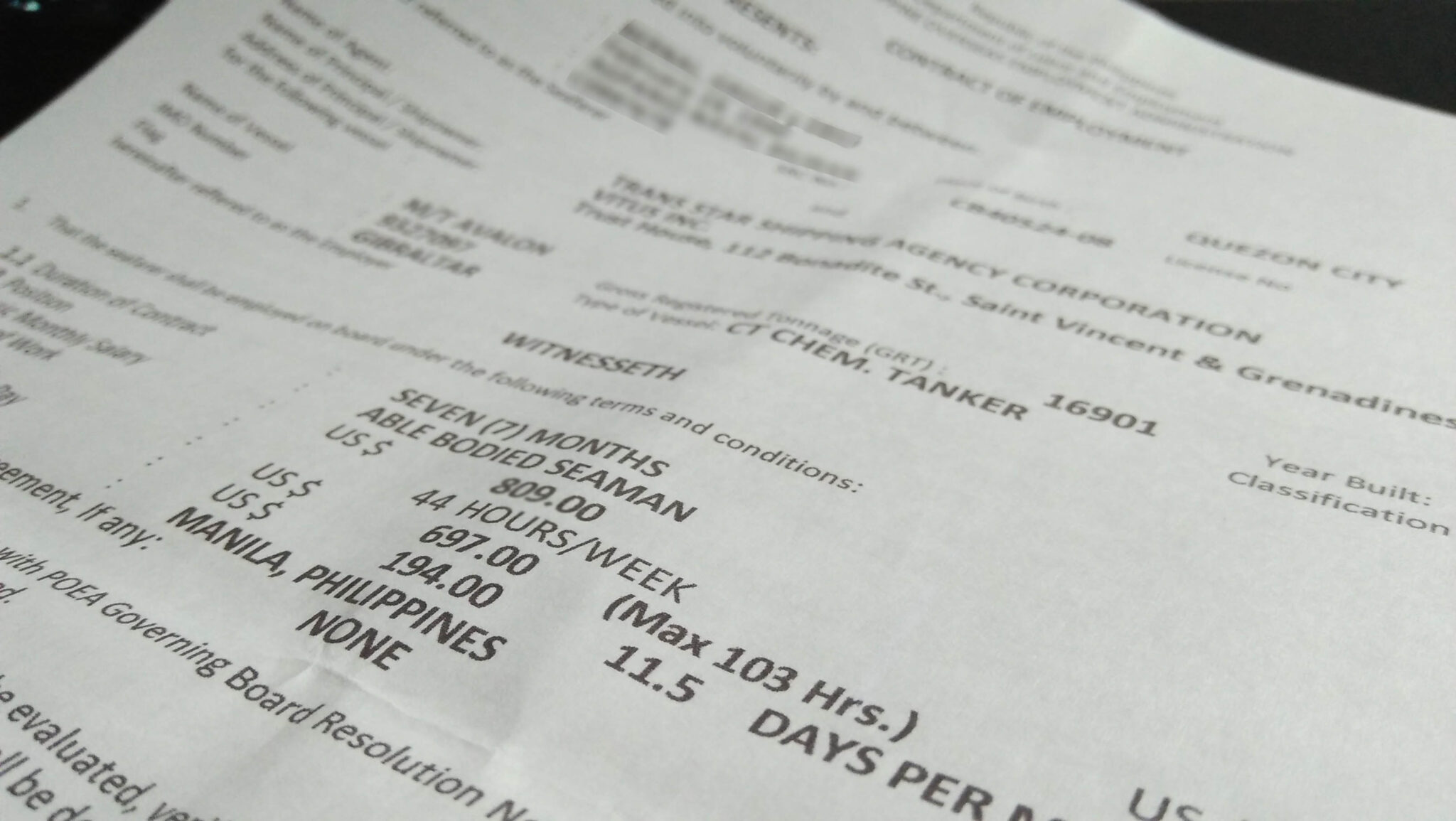 Every two years, the International Labor Convention (ILO) Joint Maritime Committee convenes and discusses the recommended minimum wages for seafarers. It is a concerted effort between the International Transport Worker’s Federation (ITF), the International Chamber of Shipping (ICS) and the representative list of selected maritime countries.

These organizations convene whenever the wage standard is reviewed or altered. Before agreeing anything, they must consider a few factors affecting every country. These are the changes in consumer prices, changes in exchange rates and the purchasing power of the US Dollar.

These elements answer our questions on why some nationalities earn more while others earn less. Let’s talk about this in particular.

Whenever ILO wants to adjusts the salary of seafarers, they don’t just do it on their own. A sub-committee consisting of all major maritime countries and major supplier of seafarers are consulted. 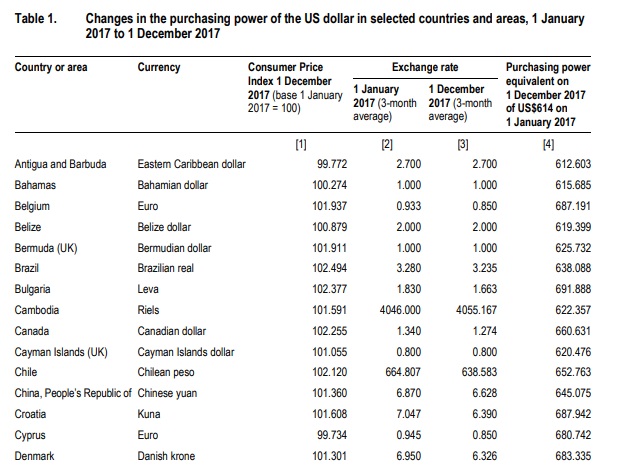 Consumer price index (CPI) is one of the basic tools in measuring inflation. It is used to evaluate the price changes in relation to cost of living.

CPI examines the weighted average of prices in  a basket of consumer goods and services such as food, medical care, utilities and transportation over a period of time.

Different countries have their own CPI. Thus, it’s one of the contributing factor which affects our salary.

For us Filipino seafarers, higher exchange rate means more Peso on our allotment. However, this could adversely affect the prices of goods in our country.

Products using imported raw materials will be the first to feel its impact. These businesses will pass the increased cost to the consumers.

Thus, the committee takes into account the exchange rates over a period of time when adjusting seafarers’ wages.

Purchasing power of the US Dollar

Purchasing power refers to the value of a currency expressed in terms of the amount of goods or services that one unit of money can buy.

When convening for wage adjustment, the Committee applies changes in CPI and exchange rate to determine the purchasing power against the local currency for each country.

The result will then be used to balance our pay.

Aside from the ILO Joint Maritime Commission, CBAs are also used to define minimum wage standards for seafarers. It is primarily enforced by trade unions. The most active and famous in this craft is the ITF (International Transport Workers Federation).

A collective bargaining agreement is a legally binding, written contract between a company and its employees represented by an independent trade union. This agreement sets down conditions for employment like wages, working/ rest hours, holidays, vacations, leave pays, overtime payments and procedures for dispute resolution. 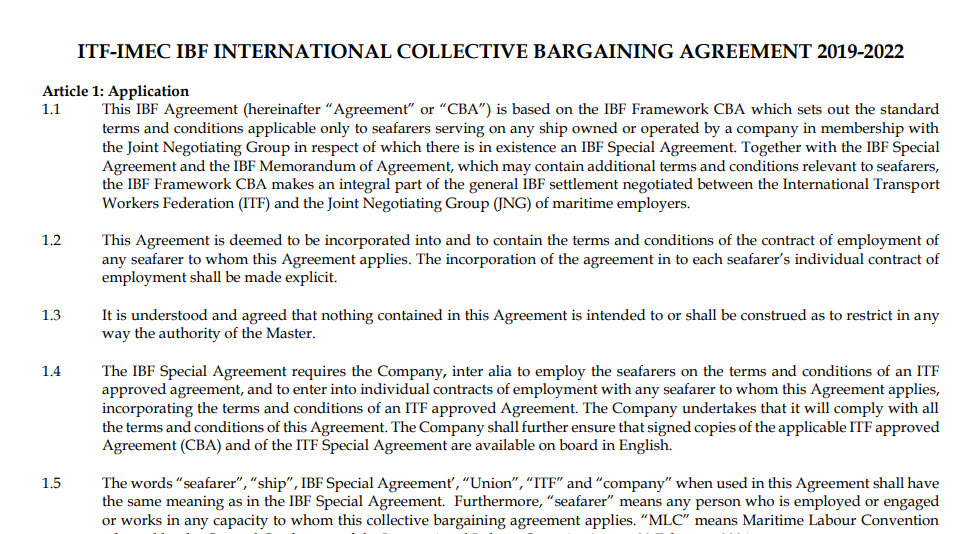 An example of a Collective Bargaining Agreement

Example of Seafarer’s Union are the following:

Sometimes, we hear the term ITF rate, AMOSUP rate or even POEA rate. It pertains to the wages of seafarers enforced by these unions.

Despite the hardships of becoming a seafarer, it still attracts more and more people. We can even find women on board who are taking this career very seriously.

Is your salary within the shipping industry’s standard? Share your thoughts.