My Line Crossing Experience When Passing the Equator 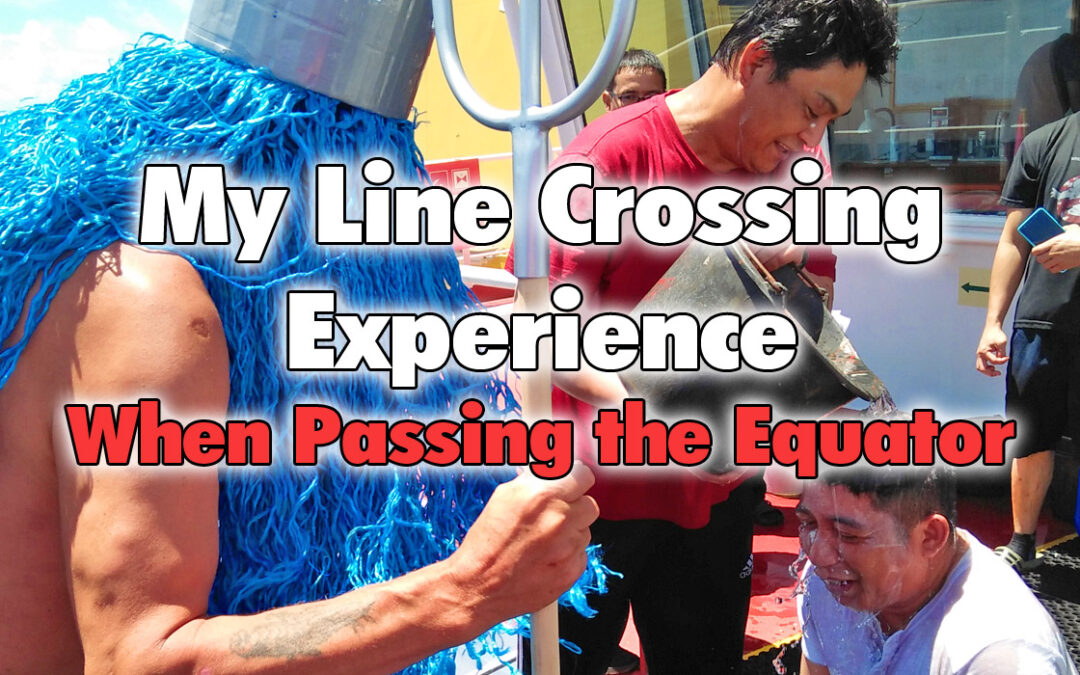 Crossing the equator should not be a big deal. This imaginary line is nothing special it only marks the boundaries of the northern and southern hemisphere.

If you cross there, nothing really happens. You don’t get young, turn old or grow some scales. I remember crossing it with an ice cream in my hand. Guess what day was that!

What happen when you “Cross the Line”?

In the seafaring industry, crossing the equator is filled with mystery and fun.

For first timers, they may find themselves undertaking some challenges. This is the arcane part as they don’t know what they will be going into. But its also fun as the crew takes these demands merrily.

Who knows what King Neptune or Poseidon, the “God of the Seas”, has in store for those Polliwogs?

Not all ships may celebrate this but the ones who do are following an age old tradition practiced for hundreds of years.

Those who haven’t crossed the Equator are called Polliwogs. They are, in this sense, “inexperienced sailors unworthy to sail the seas”.

At the time of crossing, the Wogs are summoned into Neptune’s Court to be baptized and be called Trusty Shellbacks or “Sons and Daughters of Neptune”

With Neptune’s presence is his wife Amphitrite, Davy Jones and other characters. They are dressed in costumes appropriate to their role, King Neptune being the one giving the verdict.

The Wogs have no choice but to submit to an embarrassing display of punishments.

In every beginning, a baptism is often initiated. However, the Rites of Passage isn’t your normal water dipping ceremony.

Wogs must do stupid things and undergo various tasks which may including being tied with a rope and flushed with fire hose.

Others put them in a room with food waste for 30 minutes. In some cases, they drink strange concoctions. My experience was being poured with ice cold water.

When we say Polliwogs, we don’t refer to the cadets. First timers crossing the equator- either cadets, officers or ratings, are bounded with this ceremony.

Meaning of the Ritual

There is a meaning behind every ritual that’s given to the seafarers.

Being splashed with a fire house symbolizes that if you get sloppy in your job, you’ll have plenty of water getting in your ship.

Food waste trial reminds you to keep a good hygiene.

Getting tied with a rope and untying it together promotes the spirit of teamwork which is very important onboard.

Even if you are a seaman for many years already, there will always be a first time. In my case it was crossing the Equator after 11 years of sailing.

It was fun and very memorable.

Two days before crossing, it started off as a gossip. Everyone on board was talking about Equatorial Passage. And since it was the first time for that ship to sail across the Atlantic, most of the crew on board were Wogs.

At 13:00H, we were all summoned to the bridge. We know that the ceremony has started but we didn’t know what awaits us.

With ice cold water buckets in our hands, we were beholden at Poseidon’s presence as he graced us on the Starboard wing. The sun was shining so bright that his crowning glory was magnified tenfold.

His hair was as blue as the deepest ocean and his white beard like seaweeds touching his bare chest. I like to think of it as a mop. 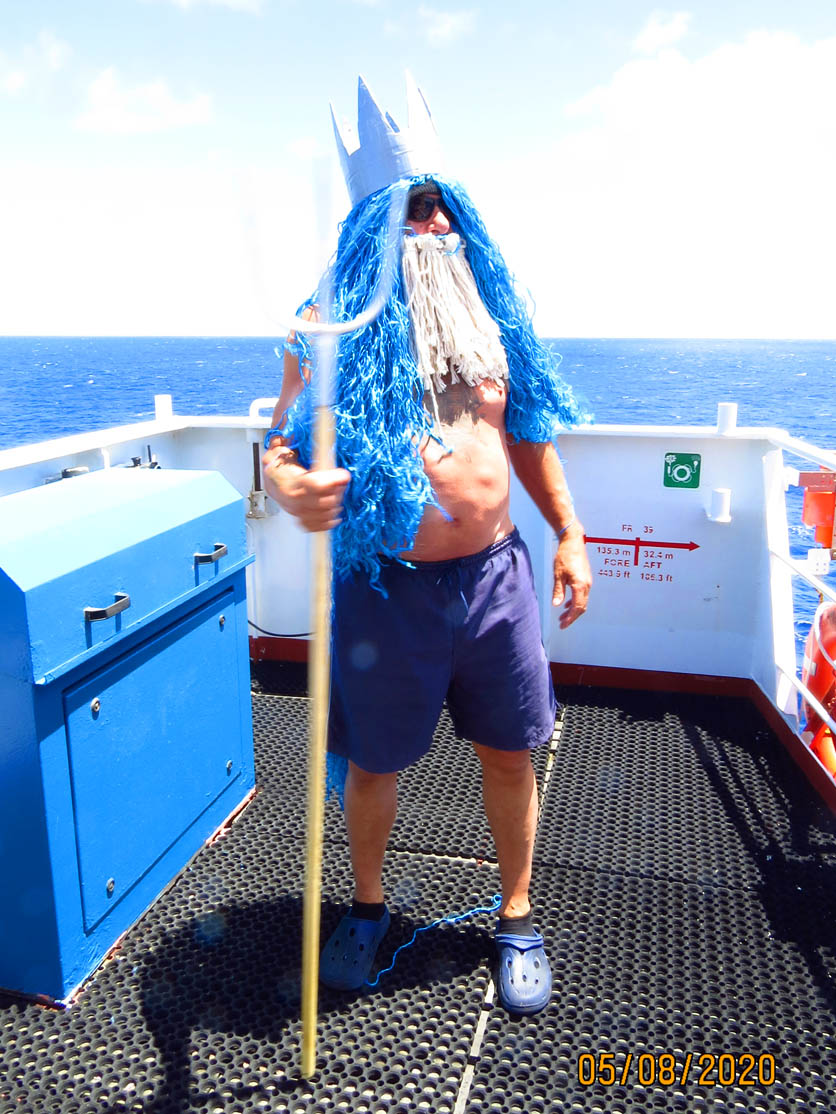 In his right hand was his mighty Trident which holds and releases the secrets of the deep. And yes, he has that dark shades implying that we, Wogs, are not worthy to gaze his eyes.

Some say he has no legs and is similar to a fish. But lo and behold, he is riding an alligator- a fierce croc obeying his every whim. Even I was afraid to get near him.

Wind started to gust and you can see the foamy ocean in the background responding to his splendor.

Since we are sloppy Polliwogs, we must be “shaved” from the outside to get rid of every filth that accumulated during our seafaring lives.

Additionally, we must also be cleaned on the inside to be completely reborn.

Shaving our old self

We froze thinking about our fate until King Neptune touched his beard.

“The shaving must commence!”, he roared.

And so, we found ourselves being applied with a strange mud that we should not, under any circumstances, swallow or taste.

The say this mud or “cream” was 500 years old and guarded by the most ferocious sea creatures on the planet.

Even the tiniest invisible hairs was without matched on this cream when using his sacred shaver which touched millions of sailors already. 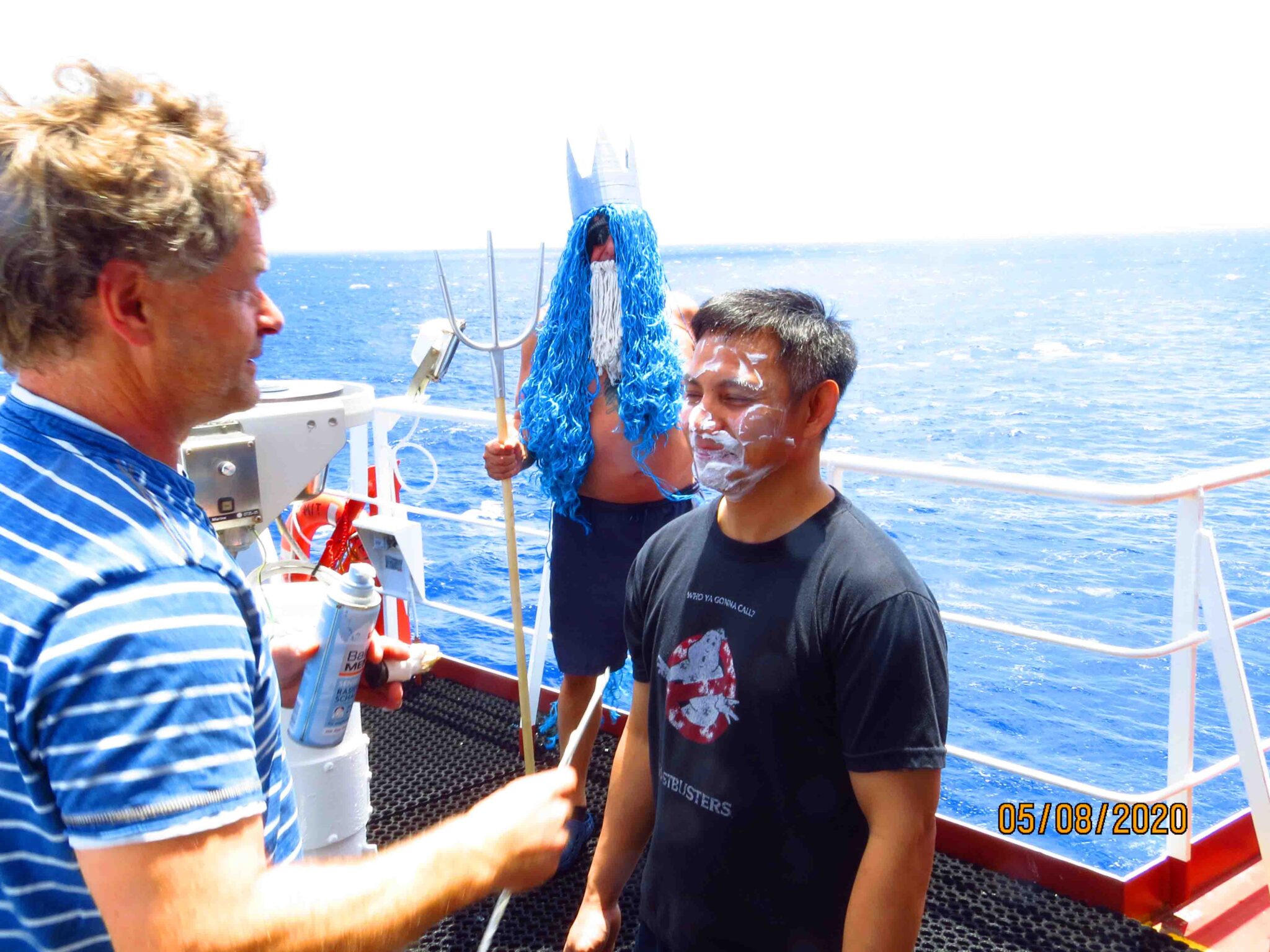 Shaving using a 500 year old cream stored from the very depths of the sea.

We felt cleaned and refreshed already with the first ritual.

Suddenly, we found ourselves face to face with a very strange drink concocted from the deepest parts of the ocean.

It was so gross yet bizarre I can still feel it in my mouth whenever I think of it.

Judging from its taste and texture, it was something like olive oil mixed with alcohol, pepper and water.

According to legend, this awful tasting “medicine” was needed to purify us from within. 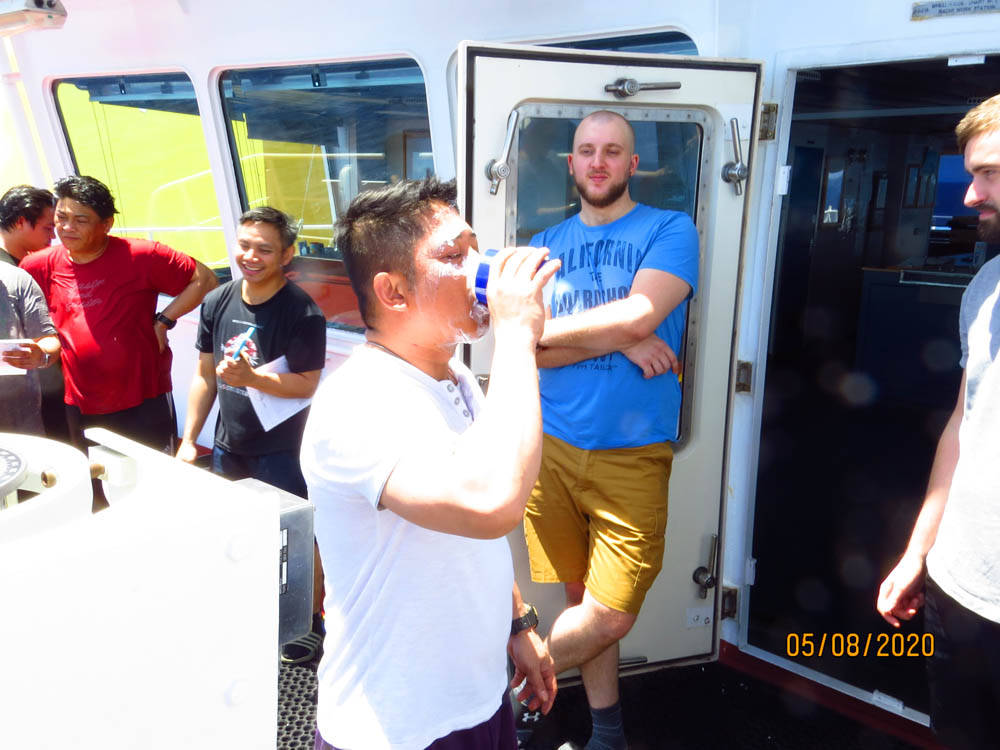 Magical drink concocted from the strangest parts of the ocean

Washing our old self

After those strange rituals, we knelt giving total respect and submission to King Poseidon.

As we touched our knee on deck, an ice cold water taken from the farthest poles of the earth was poured unto us.

It felt like thousands of needle piercing our skin. I had to inhale as deep as I can as the supernatural fluid covers my body.

The shaving stripped us of all our old Polliwog ways. This icy waters from the North and South Poles was the final piece of the baptism. 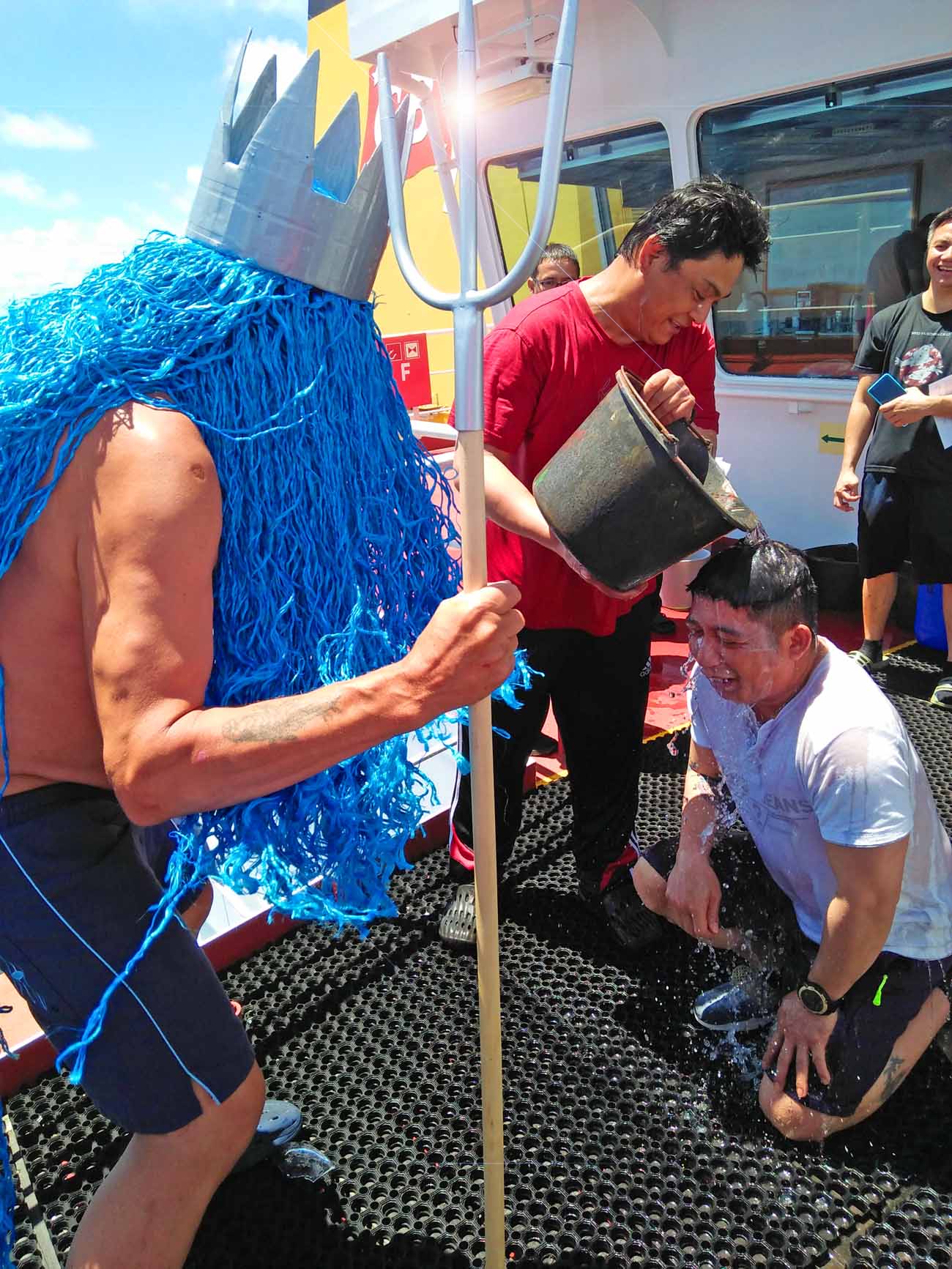 Line crossing experience will not be complete without the baptism or washing of our old self.

From Sloppy Polliwogs to Trusty Shellbacks

It was Neptune’s immutable rule that no soul must pass the Equator unbaptized.

After the washing, we were given a new name while sailing in the Southern Hemisphere. This is a symbol of rebirth.

Our new name reflects the type of person we are. One was called a “Turtle”. Another was “Octopus”. Others were electric Eel, Mackerel and “Oil Sardine”.

We were now called Trusty Shellbacks or Sons and Daughters of Neptune.

From our Rusty Woggy life, we transitioned to a life worthy to travel the Seas knowing that King Neptune would always guide us.

After all those rituals and rites, King Poseidon gave each of us a certificate. It contained our names and the new aquatic name that we must use whenever we sail at the Southern Hemisphere.

It also contained the name of the ship, its call sign and the important date of our baptism.

After being satisfied of what he did to us, Poseidon rose and jumped into the sea riding a huge wave.

He disappeared into the deep without any trace.

The good thing was he left us cases of beer and some food that we enjoyed the whole day and night! 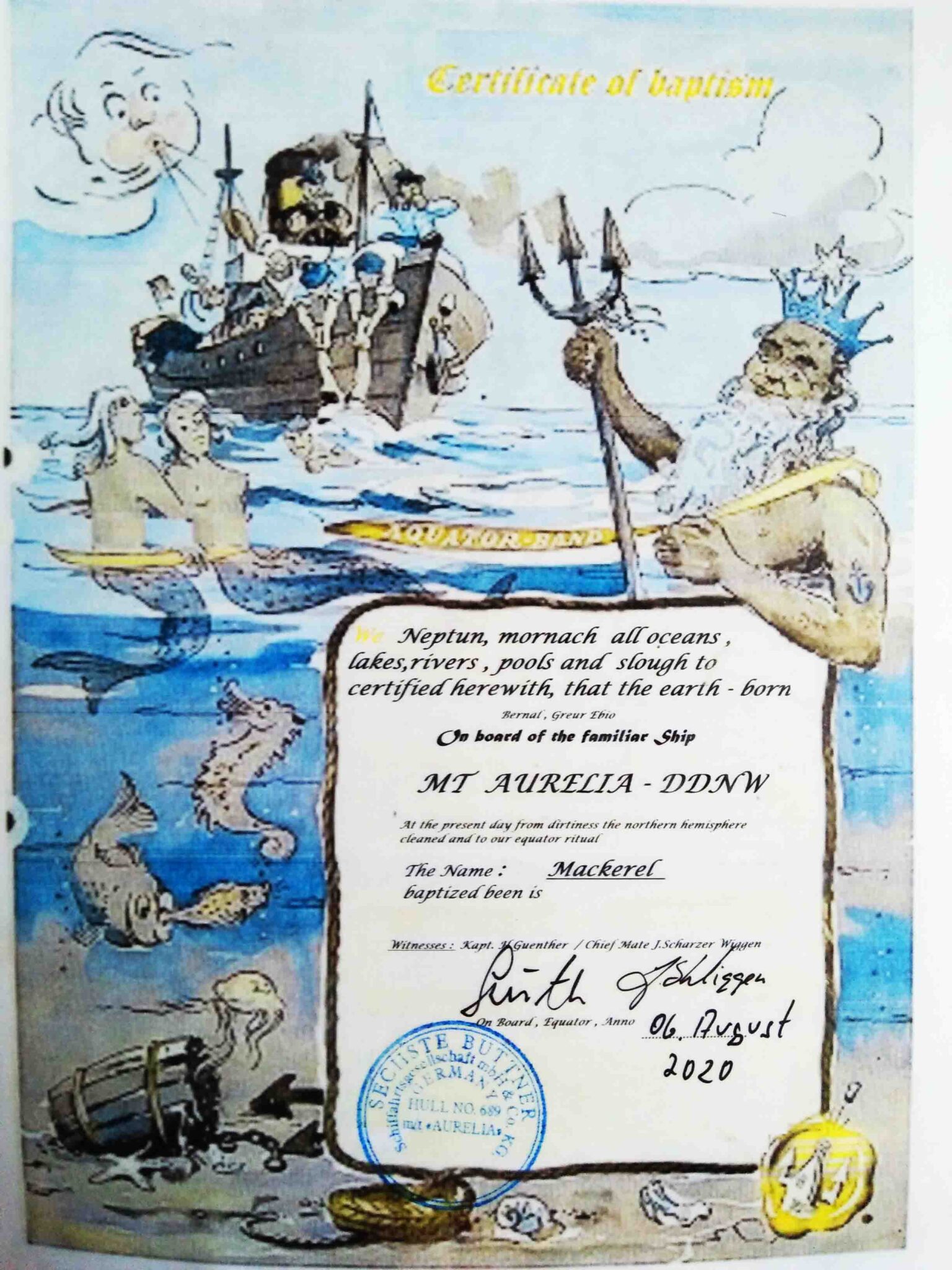 Certificate of Baptism given after our line crossing ceremony.

Worthy of a tattoo

During the times when certificates were not issued, sailors who undergo line crossing ceremony tattooed a Shellback Turtle somewhere on their arms or legs.

This served as their certificate and a superstition as well that Neptune will keep them safe during their sea life.

If you think you seafaring is in your blood and you like tattoo so much, you can check out some cool and amazing sailor tattoos.

Thousands of seafarers use these skin arts throughout the generations.

How was your line crossing experience? Are you now a Trusty Shellback  or still a Rusty Wog?

May the winds be in your favor