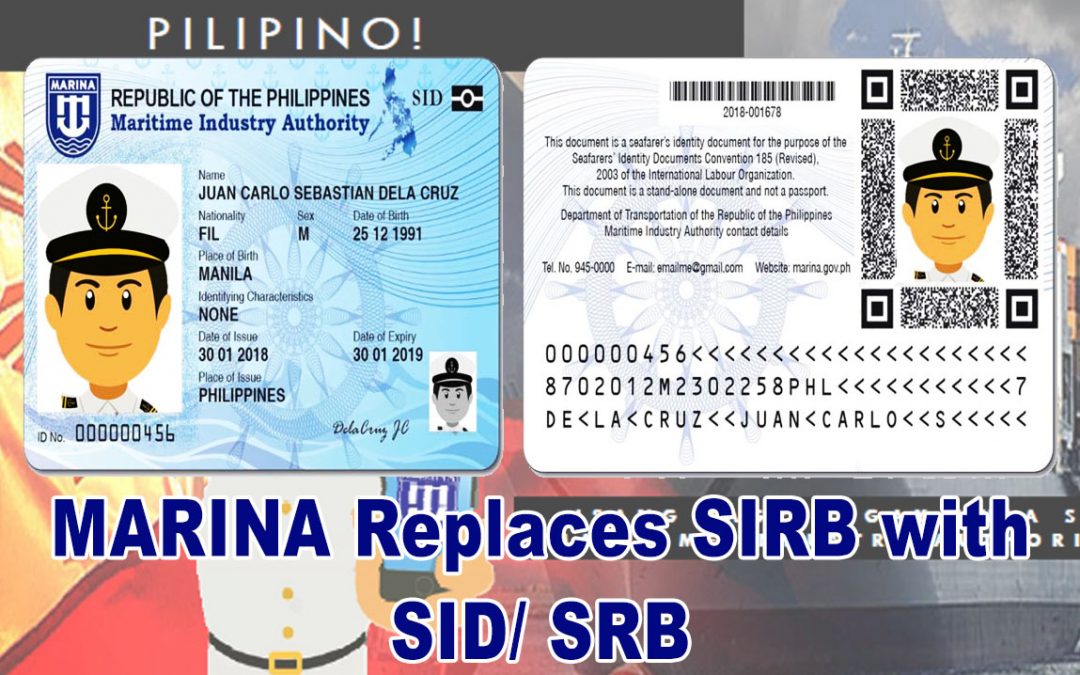 The Maritime Industry Authority (MARINA) launches a new identification system for seafarers called SID/ SRB. Since November 2019, they already stopped producing our Seafarer’s Identification and Record Book (SIRB) as you can see in online appointment MISMO.

What they are issuing today are the Seafarers’ Identity Document (SID) and Seafarers’ Record Book (SRB).

What is SID/ SRB?

SID/ SRB are two different entities but came from one being. They are like our Seaman’s Book split into two- an Identity Document and a mariner’s Record Book.

So instead of having a single powerful Seaman’s Book which functions both as an identification and service record log, we now have two separate, probably redundant documents.

You may want to ask, “What’s the point of having those two?”.

Let’s find out more about them. 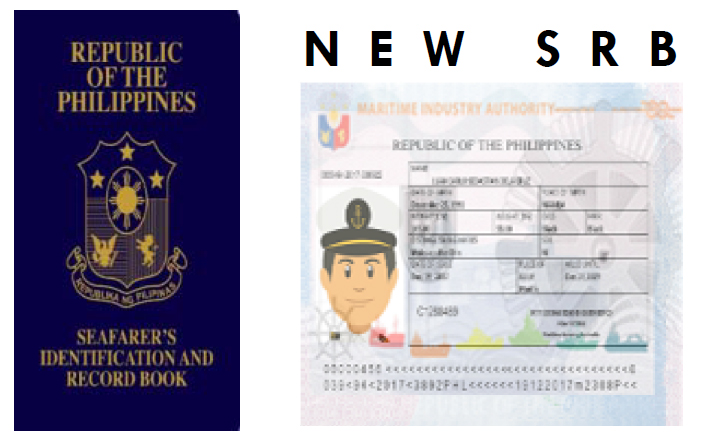 MARINA has separated the “identification” feature of our SIRB, thus giving birth to SID.

Basically, we can summarize them as below.

Since the 9/11 terrorist attack, maritime security became very tight to the point that some states or ports denied seafarers of entry or shore leave.

To avoid the negative effects of stringent security, Seafarers’ Identity Document was born.

In fact, this new document takes on its security feature more seriously.

The physical card itself is packed with distinct attribute, biometric data and an online/ offline smart phone verification. They are also readable in international border controls, as what MARINA claims.

Our new SRB is formerly known as SIRB. This document is issued by the Administration to all Filipino seafarers and cadets/ cadettes.

SRB’s function will exclusively be for records of employment. It contains vessel’s particulars and information of the seafarer’s position/rank held on board.

The legal basis for this is highlighted in Seafarers’ Identity Documents Convention 1958 (No. 108).

The paper used in SRB has limited security features because that function is left to SID. 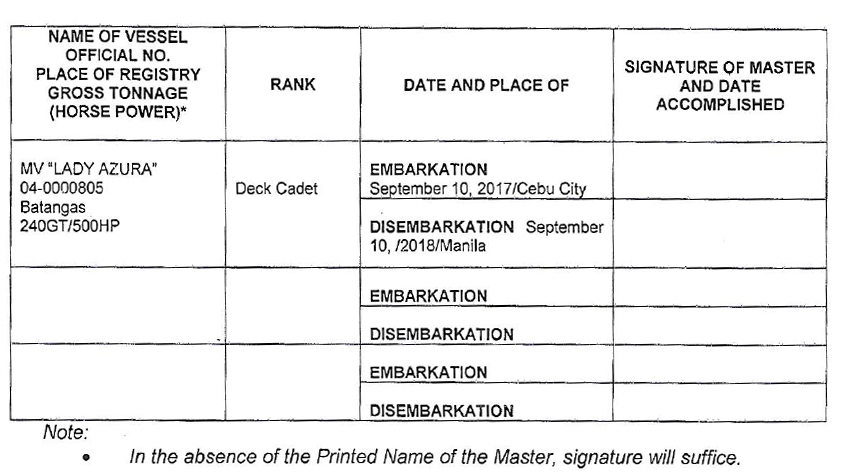 How Can I Get the New SID/ SRB?

As you may noticed, application for seaman’s book in MISMO is no longer possible. MISMO is now solely for STCW-type transactions.

If you want to get a Seafarers’ Identification Number (SID) and/ or Seafarers’ Record Book (SRB), they built a new website solely dedicated to that.

MARINA SID/ SRB Online appointment is now open. However, slots are filling in fast so you better hurry and book your application without due delay on https://sidsrb.marina.gov.ph/.

How Powerful is the New SID/ SRB?

By this, I’m pertaining to countries which recognize the Seafarers’ Identity Document (SID) and Seafarers’ Record Book (SRB).

Can I use it on any port? Can I go for a shore leave in the United States even if I have no US Visa? Would the border control allow me to go to Gibraltar (UK territory) from Spain?

Can we do crew change in Europe even with expired Schengen Visa?

Since it is based from ILO 185 Convention, only those countries which are signatories honors it. Furthermore, we still have to verify if this is truly happening on the ground.

Our Seaman’s Book (SRB or SIRB) however, remains the de facto document for seafarers. It is still internationally recognized. SID acts as an extra layer of security both from any state and the seaman. 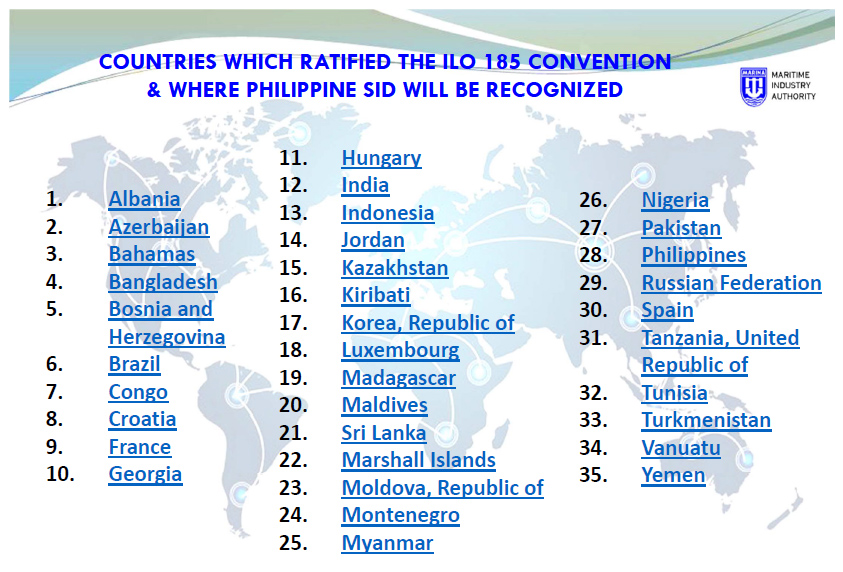 To answer your questions above, our Seafarers’ Identity Document can only be use in those countries signatory to the ILO 185 Convention.

If your visa is expired and your contract is finished while berthed in any US port, you may have to wait for the next convenient port before you can disembark.

US Coast Guard or Immigration control won’t recognize your SID. Forcing yourself will only cost you or your company a lot of money.

You can still go home while in Schengen States with an expired visa since they provide exit visas for seafarers. But using SID? I don’t think so.

Who Can Apply for a SID/ SRB?

As per MARINA Memorandum Circular MD-2019-01, SID/ SRB covers all Filipino seafarers 18 years of age engage in any capacity on board ships 35GT and above .

In addition, Filipino cadets/ cadettes below 18 years of age may be issued SID/ SRB for shipboard training purposes only.

If your current Seafarers’ Identification and Record Book is still valid, there’s no need for you to get the new SRB.

You will only get the new Seafarers’ Record Book (SRB) when you renew or apply for a new one after November 2019.

Since my old SIRB expires in 2027, I won’t be converting it to SRB until it expires or gets fully filled. And I may not also apply for the new Seafarers’ Identity Document (SID) for the mean time.

Have you got your SID and SRB? Tell me what you think about them in the comment section below.