Do You Know Someone? IMO is Looking for the Bravest Hero at Sea 2022 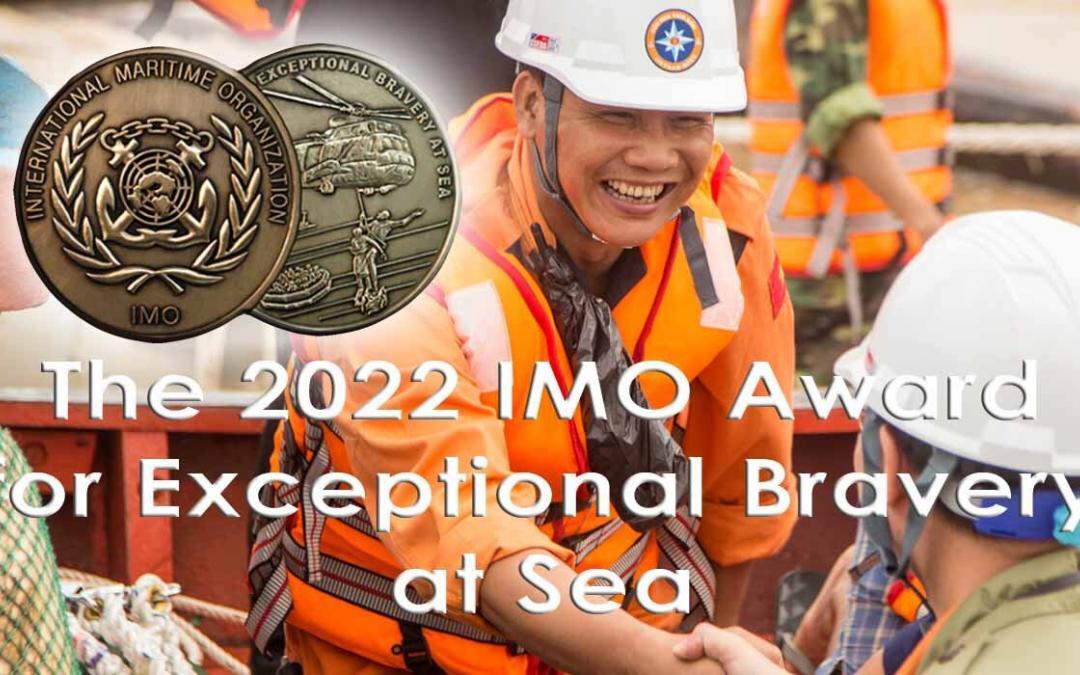 The ocean is not for the faint-hearted. And that’s where heroes are made.

Since 2007, the IMO awarded individuals who displayed exceptional bravery at sea under extreme situations.

These people put their lives on the line to rescue others in distress or prevent a major catastrophe from happening.

Operating from different parts of the seas, all of them have one thing in common. They showed extraordinary heroism despite the odds being in their favor.

Who is allowed to join?

The IMO will confer these awards to individuals or group of individuals who showed exceptional courage at sea.

Specifically, such persons must have performed extraordinary bravery in attempting to save life at sea or preventing damage to marine environment at the risk of their own life.

Following an amendment to the award guidelines, nomination criteria also involves extraordinary seamanship skills in very difficult conditions or any other display of outstanding courage at sea.

Who can nominate these heroes?

Three bodies are allowed to nominate individuals or groups of individuals who displayed exceptional heroism.

These are the following:

Their nominations should be addressed to the Secretary-General. It should provide a full description of the circumstances and events giving rise to the nomination.

Their submission should include the following factors:

1) location of the incident;

5) determination to conduct the rescue operation;

7) degree of risk (to human lives and/or the marine environment) involved; as well as

8) any other information supporting the nomination

Nominations are open until 15 April 2022. Awarding ceremony will be held during the World Maritime Day on September 2022.

Otherwise, it will be celebrated on another major IMO occasion on a determined date.

There are three categories of honor during the awarding ceremony.

First is the award itself for the most exceptional act of bravery conducted at sea.

Secondly, certificates of commendation are given to nominees who have committed acts of extraordinary bravery.

Thirdly, letters of commendation are sent to those nominees who are judged to deserve some special recognition for meritorious actions.

Recipients of the Most Outstanding Bravery Award from 2007 to 2021 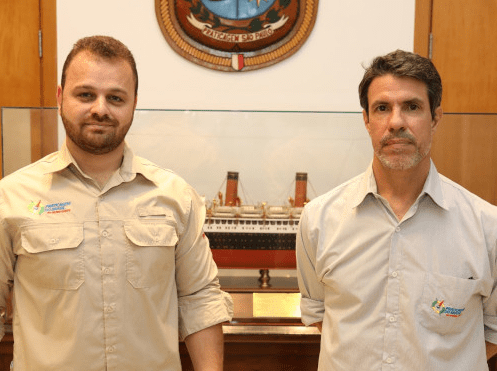 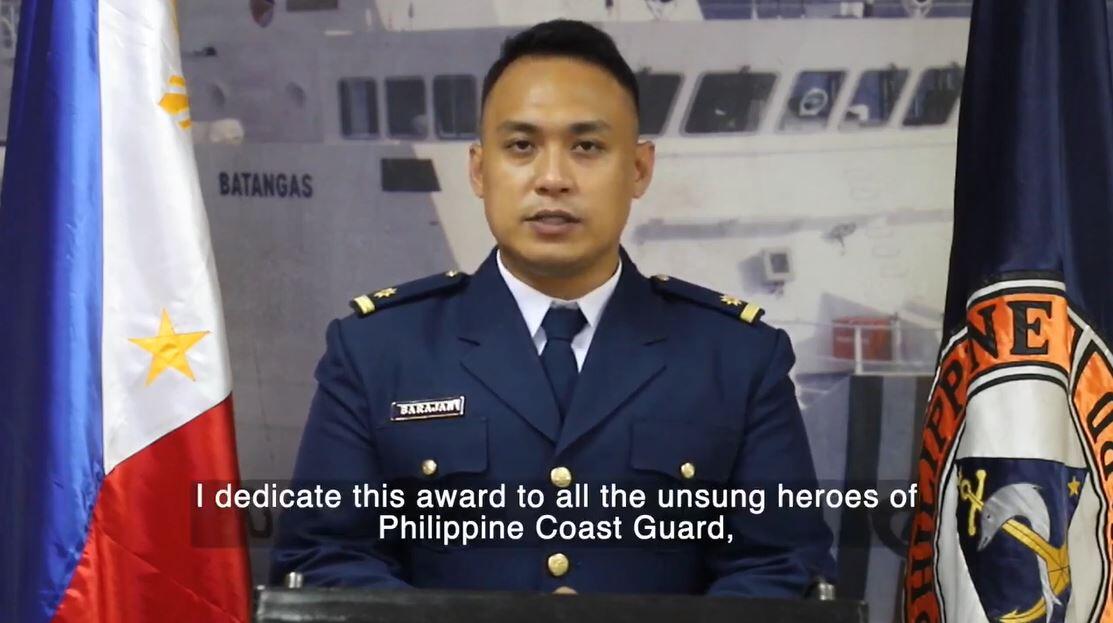 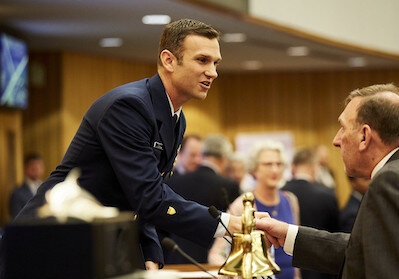 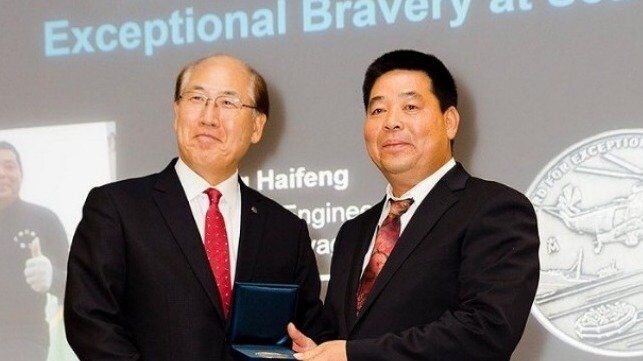 Zhong Haifeng, a rescue diver from China who made a series of underwater dives to rescue three people from a sunken cargo ship received the 2018 IMO Award for Exceptional Bravery At Sea. 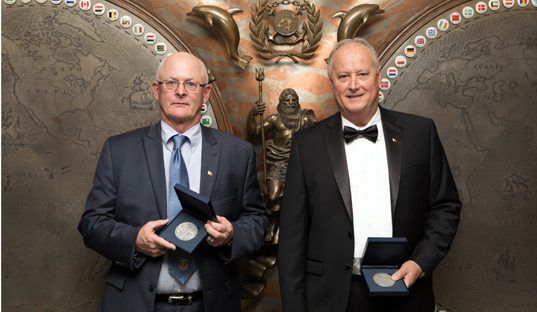 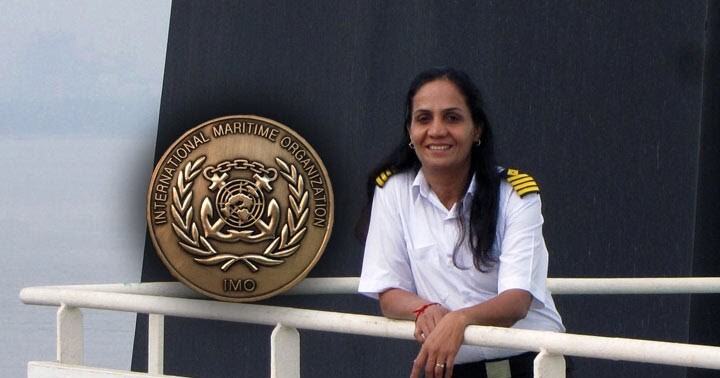 Captain Radhika Menon, Master of the M/T Sampurna Swarajya, nominated by the Government of India, for her display of great determination and courage in rescuing seven fishermen from the sinking boat Durgamma.

She is the first woman to be receive the 2016 IMO Award for Exceptional Bravery at Sea. 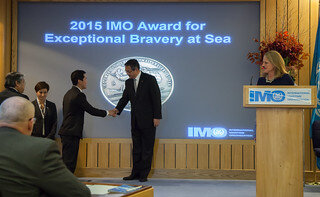 2015 Award has been presented to Aviation Survival Technician Christopher Leon of the USCG for risking his life to save four men from a sinking ocean-going rowing boat in a dramatic rescue in the dead of night in heavy seas in the Pacific Ocean. 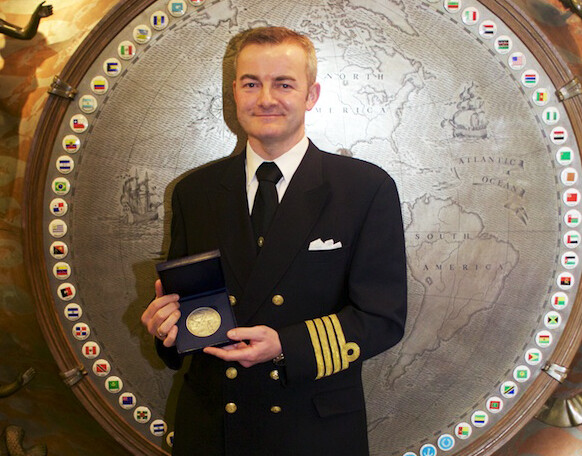 The 2014 IMO Award for Exceptional Bravery at Sea was awarded to Captain Andreas Kristensen and his crew of the Britannia Seaways, who were nominated by Denmark for their courage and determination in fighting blasts and fire on board the vessel, at great risk and danger to themselves. 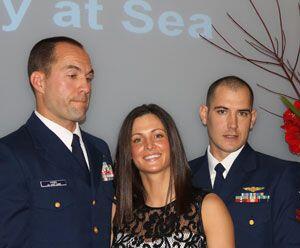 The 2013 IMO Award for Exceptional Bravery at Sea was awarded to two rescue swimmers from the United States of America, for saving the lives of 14 crew members from the tall ship HMS Bounty.

Mr. Jinguo Yang, a sailor in China who died trying to save the life of a ferry passenger was also awarded posthumously. 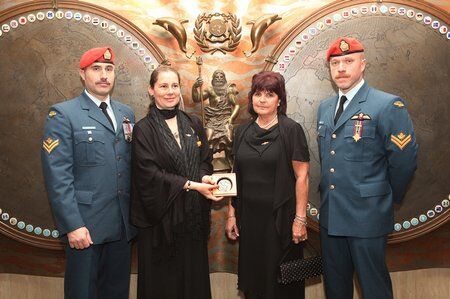 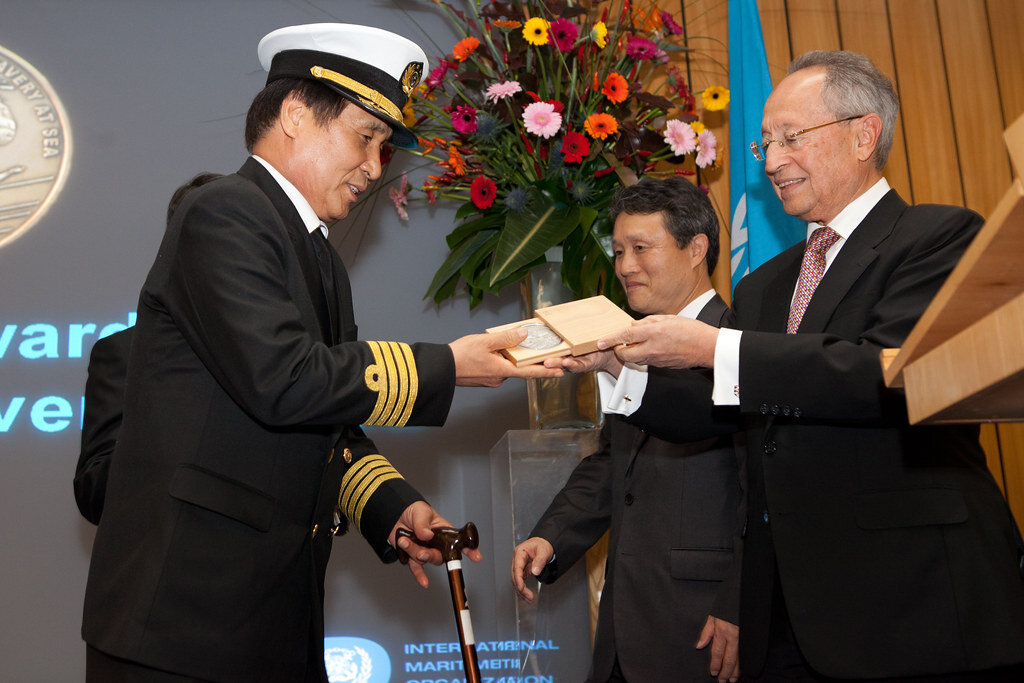 Captain Seog was nominated by the Government of the Republic of Korea for his heroic actions to keep his vessel and crew safe, while suffering vicious assaults, following a hijack by pirates off the coast of Somalia 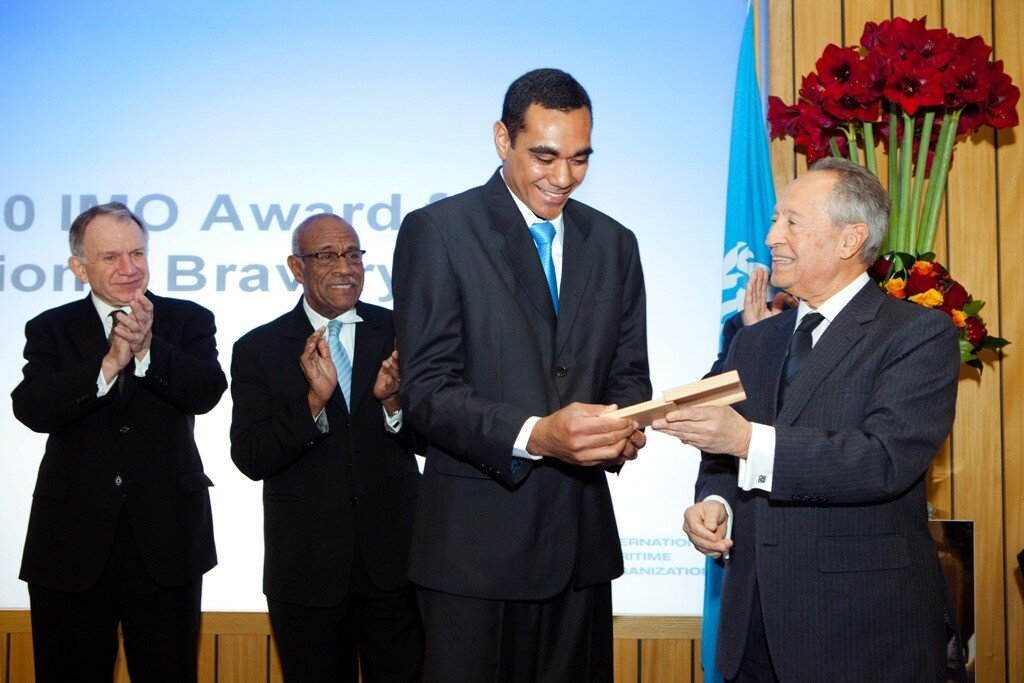 Mr. James Fanifau, Fourth Engineer of the Singapore-flagged general cargo ship Scarlett Lucy. He received the Award for his part in the dramatic rescue of two survivors, including Dr. Morgan, from the yacht Sumatra II, in May 2009, amid severe weather conditions in the Tasman Sea. 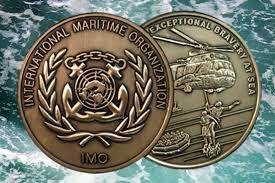 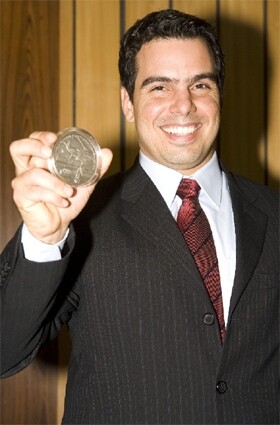 2008 IMO Award for Exceptional Bravery at Sea presented to Brazilian seafarer Mr. Rodolpho Fonseca da Silva Rigueira, of the drill ship Noble Roger Eason for his heroic actions in saving fellow crew members from an explosive fire on a ship. 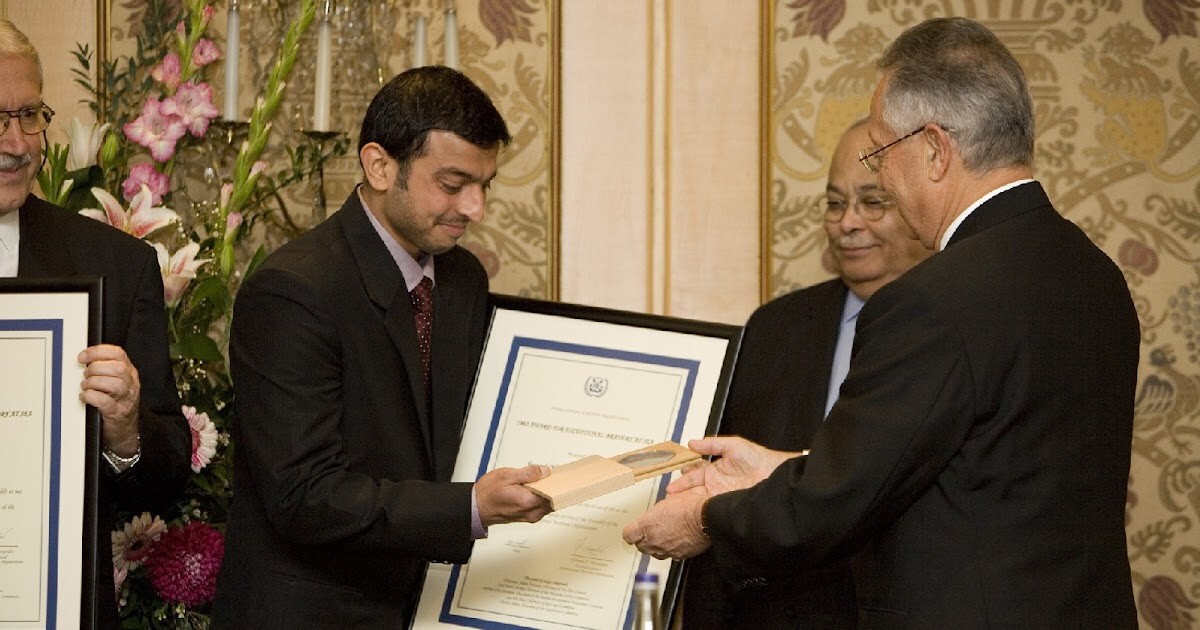 Inaugural IMO Award for Exceptional Bravery at Sea presented to Second Officer Mustafa Topiwala of the OBO Carrier Searose G and Captain Zvonimir Ostric (who was on the vessel as onboard trainer at the time of the incident) for dramatic rescue of Teklivka crew.

Heroes are not born heroes. They are made when situation demands normal people do extraordinary things.