Bonus and Extra Income Opportunities for Seafarers While On Board 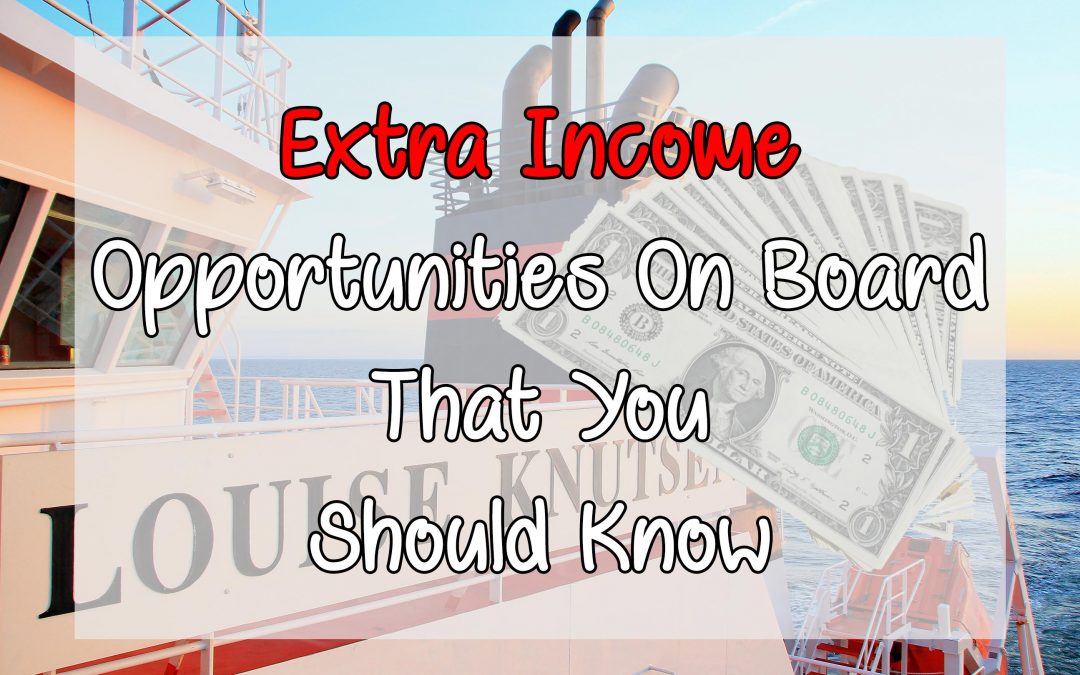 Aside from the regular salary we receive every month, some ships provide extra income opportunities for their crew.

People are motivated by money and these bonuses are a good way to boost their morale especially during inspections like the vetting process.

But not all companies have this kind of policy. Here, we will discuss some legitimate and legal extra income possibilities some of our seafarers are lucky to have.

Work overtimes cannot be avoided on board. Our rest hours and working hours are totally different from that on land. We can be called for duty at anytime of the day or night.

For some yes. However, if our excess overtime is paid handsomely, then most of us would be very happy to work even during Saturdays, Sundays and holidays.

Many years ago, I experienced this in a vessel which was running on a time charter contract. The voyage was very short- mostly 6 hours of navigation and 3 to 8 hours pilotage.

Our working hours were pretty much over the limit. But at the end of the month, we were given an excess overtime of more than 120 hours.

Sometimes, our senior officers add more if they are satisfied with our performance. Pa-kunswelo kumbaga.

Now if your overtime rate is 3.52USD per hour (that’s I think for Ordinary Seaman), then you would have an extra income of USD422.4.

Not bad eh, mate? Imagine that with the other ranks.

On some types of ships like tankers, there is a scrutinized survey from oil companies called a Vetting Inspection.

A Vetting Inspection is conducted by oil companies to a particular ship. The whole process is focused on the safety aspect to determine if the vessel complies with all the rules and regulations.

In short, this is the ship’s ticket to get voyage contracts and earn money.

If the ship fails the inspection, those companies won’t charter the vessel because they see it as unsafe or dangerous.

Or the ship could still possibly get some voyage but the charter hire could be very low. 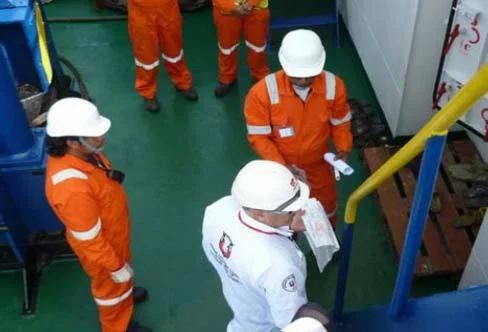 Why the Bonus Prize?

The ship’s crew is the key to passing the inspection.

Preparation is very arduous since a single observation, finding or mistake could make the ship unfit for charter.

To pass the vetting process, the whole crew must gear up and keep the vessel on the highest safety standard as they can. It’s a team effort.

Luckily, some companies motivate their crew to give the best cooperation by rewarding a prized money called vetting bonus.

Others even double the amount if the ship got zero observation especially from oil majors.

On my experience, we were given $100.00 to $150.00. Though the preparation was stressful, we were compensated very nicely.

One of the busiest segment of a ship’s life is when she is in the shipyard. Even before the vessel enters the yard, preparation is made board so the work can start immediately when docked.

Once inside the yard, unusual tasks are carried out like dismantling of mooring winches, ship’s crane, main engine, auxiliary engines, pumps, valves and the like.

Cargo holds, cargo tanks, fuel tanks, chain lockers, ballast tanks, cofferdams and all others are also opened, checked and inspected. Repairs are made whenever applicable.

Shipyard personnel and technicians are present doing some repairs too.

The ship’s crew on the other hand, could be very busy with so many different jobs. They have to finish all those in the jobs list before sailing.

Tasks which cannot be made while the ship is at sea is done here. This includes chipping and painting in cargo tanks, inside ballast lines, chain lockers, winches, dismantling some pumps and more.

For tanker ships, hot work may be made on deck. 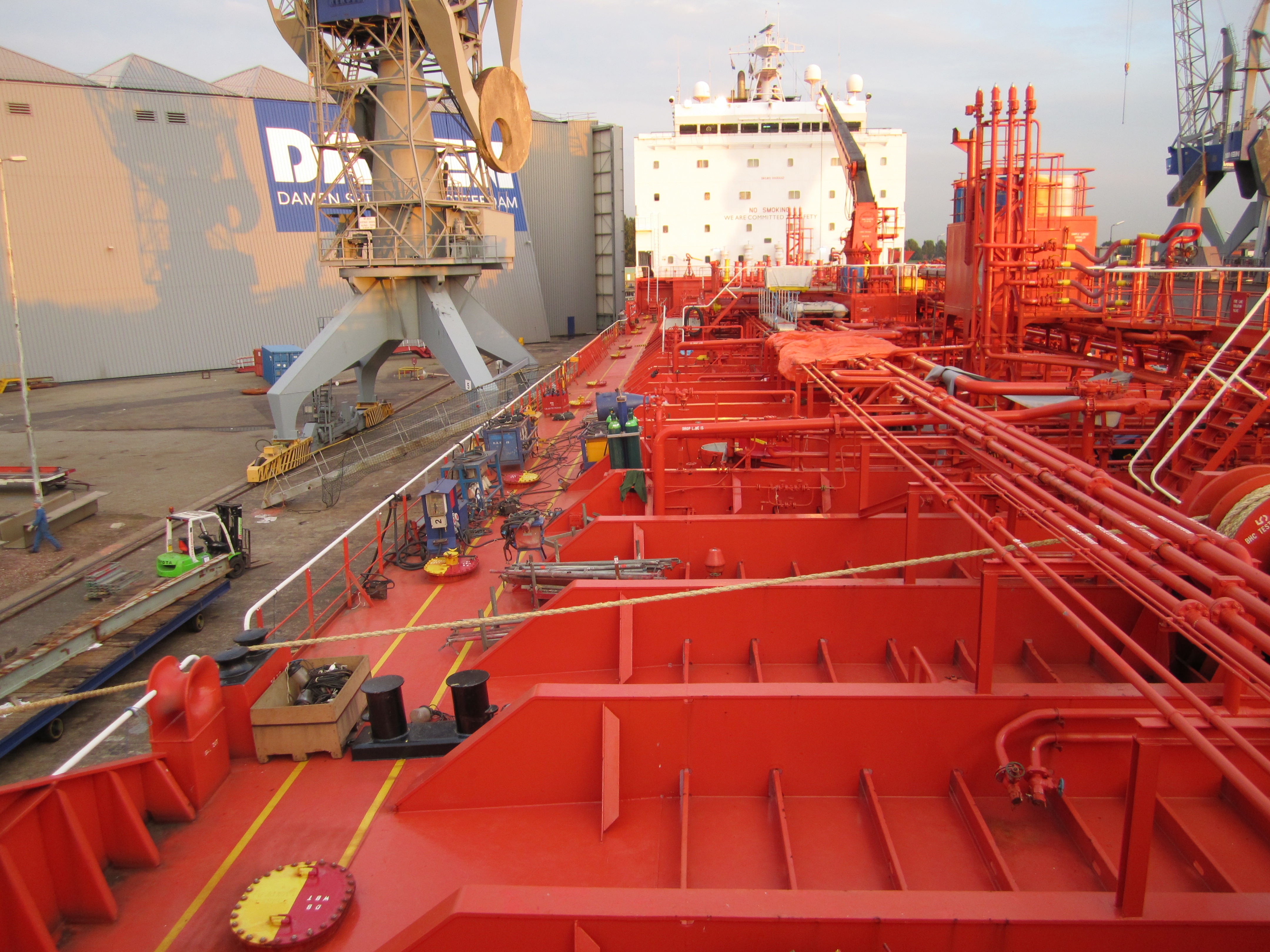 Vessel in Shipyard but in a lay-by berth only.

Fortunately, some companies reward their crew with a shipyard or dry dock bonus.

Its a compensation in a form of money given at the end of the month or when the ship finishes her repairs in the yard.

Sometimes, shipowners decide to sell a particular vessel in their fleet.

It could be that the ship is old and they’re having difficulty finding charterers.

Another reason could also be that they are experiencing financial difficulty and selling some of their ships could help make the company afloat.

Second hand vessels still cost millions of dollars when sold depending on the size, condition and age.

Thus, some companies generously give or reward their crew when they sell a certain ship. The sale bonus may only apply to the crew of that vessel being sold.

However, the crew could be unemployed for an indefinite period after selling the ship.

The Collective Bargaining Agreement (CBA) defines some provisions to this kind of event.

We have so many unused junk or scraps on board.

However, some countries especially in Asia and several parts of Africa buy scraps from ships. When your ship sails to these places, then you are in for a good treat!

Even expired safety equipment can be sold too.

If you happen to store so many junks in your ship and manage to sell them, each of the concerned parties could receive an extra $100.00 or more.

This kind of bonus usually applies to any ship especially tankers.

The presence of cargo tanks, ballast tanks, fuel tanks, cofferdams or any other enclosed tanks creates a possibility that a tank cleaning bonus is given.

There are various reasons why we need to wash tanks.

For cargo tanks, it is a preparation made so that it can be loaded with the next cargo without the danger of contamination.

Inspection, maintenance or preparation for shipyard can be a good subject on why we perform this. 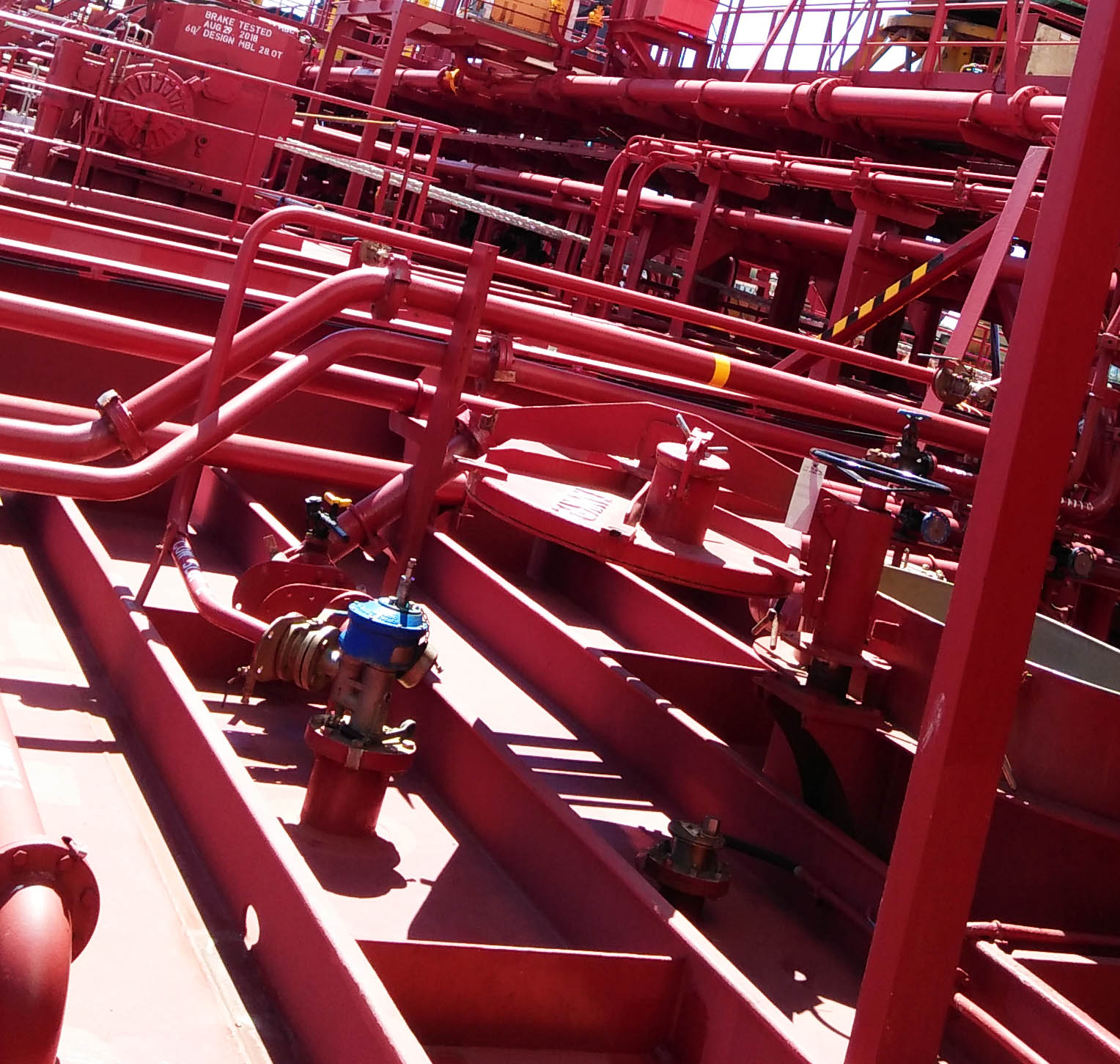 Tank Washing Machine and an open tank dome in a tanker ship.

Companies are paying extra compensation to the crew involved in tank cleaning, though not all. The payment could be a per tank basis or a lump sum depending on the agreement.

Each crew could get $100.00 every after successful tank cleaning procedure.

Hold cleaning is similar to tank cleaning only this time, it is performed in bulk carriers or general cargo ships.

Cargo tanks are for tankers while cargo holds are on the former.

The same idea is applied when it comes to hold cleaning operation- to prepare cargo holds for loading the next cargo.

Bonus is given when the cargo surveyor approves the holds as fit for loading. However, it still depends on the company if the crew is entitled with extra pay.

Slops are oily water mixture stored in a tank designed for such. They may be wash water waste from tank washing operation or when you pump inside an oily mixture from the deck.

Since dirty water with oil is not allowed overboard, they are stored in tanks called slop tanks. They have other names too like retention tank, residual tank, wash water tank and drain tank.

If you’re voyage is mostly in Europe, the vessel usually pays the shore facility or the barge when discharging slops.

But when you are in some ports in Asia, there are some companies buying these slops in a per cube basis.

What’s dirty for us are gold to them so they pay the ship for it.

Again, the amount given to the concerned party depends on many factors to which only the Master and Chief Mate can decide. But $50.00 to $100.00 cash would be a very nice extra cash for the deck crew.

Slops may be for the deck department but the engine personnel also have their own “extra income” exclusive of their own.

This is mostly through de-sludging. Sludge are dirty oil waste in the engine room stored in a separate tank called the sludge tank.

Since its an oil waste of many kinds, they are actually more expensive than slops. Slops contain more water than oil and buyers only want the oil part.

Would you be happy to receive an extra cash of $100.00 after de-sludging operation? 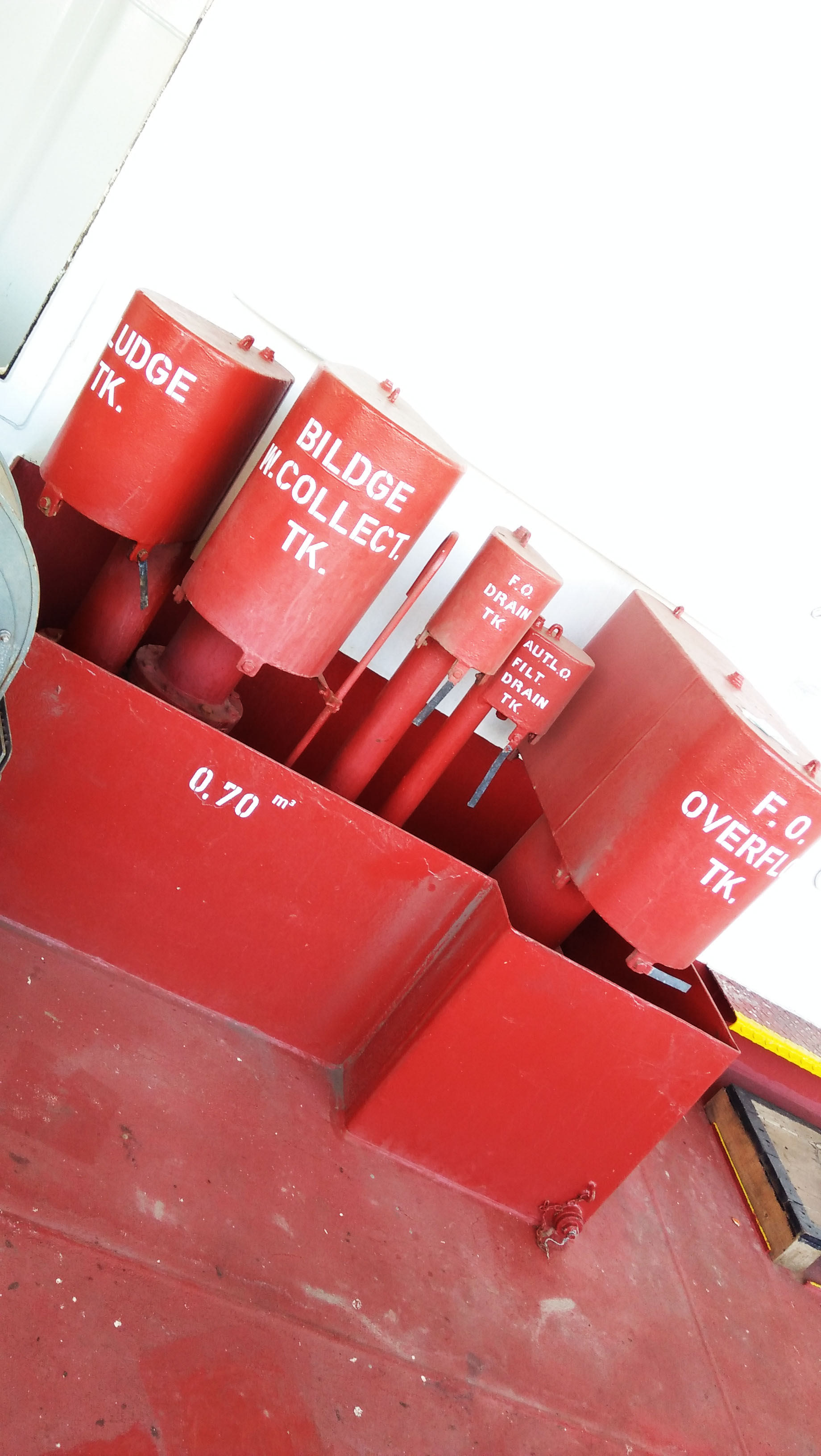 One of the most high-paying extra income-generating jobs on board is pushing operation or squeegee bonus.

Some ships carry cargoes that require heating throughout the voyage. A certain temperature is maintained too prevent it from solidifying inside the tank.

During discharging operation, these cargoes can’t be 100% discharged without the help of manual manpower.

Cargoes are trapped in some areas of the tank unable to slide to the suction side due to its viscosity.

For this reason, crewmembers are asked to get inside and “push” these cargoes so it slides to the bilge well, enough for the pump to suck it out.

A squeegee is used to do this hence the term squeegee bonus. The remaining cargo is “pushed” and when your crew mate says something about pushing, he is referring to this job.

However, this is not easy money. Remember that the cargo is heated to a certain temperature enough to keep it in liquid state.

Inside the tank would be very hot. Not to mention that its dark and very noisy.

But the reward for this job is very good since you are paid in a per tank basis. If your ship carries ten tanks with this cargo, imagine how much you’d get after pushing operation.

Not All Ships Have This So…

Remember that not all ships or companies provide their crew with these kinds of extra income opportunities. You have to ask the Officers if such pay is given or not.

One reason is that these jobs are part of your duty on board so its not necessary that they pay you with extra.

But when they do, enjoy the good times. It doesn’t lasts forever.