For more than a decade, I always find time to watch or read the manga of One Piece. The anime is actively running for almost 18 years already and the story just keeps on getting better and better.

Each ending of every episode brings new excitement to follow through the next week with lessons to learn along the way.

Take it or leave it, here are the top 8 Lessons From One Piece That You Can Apply Into Your Everyday Life.

1. Pursue your biggest dream with determination.

Your Will defines your dreams. This is always manifested by Luffy, the main character. Whenever he faces with a very seemingly impossible situation, he always reminds himself and everyone around him- including his enemies, about his ambition to become the next Pirate King. The next thing you know is ass-kicking time!

2. Look for the right team mates who have big dreams like you.

While other characters have huge number of crews and ships in their fleet, the Strawhat Pirates only have nine. But each of those nine people (ten if it includes Jinbei) have their own dreams and not just an ordinary dream. They all want to die for their dreams because in the first place, those dreams are the only ones that kept them alive. They have different skill sets too ranging from cooking, ship-works, soul music, medicine, cartography etc. or just simply goofing around during normal days.

3. Take good care of your crew.

While they have petty silly fights with each other- from who ate the last dish to seeing someone’s panties, they always watch out for one another. Everybody protects everyone and would willing to lose an arm or leg just to save someone. Remember how Luffy kicked Usopp’s ass for some ego fights? Though that episode resulted in drama to the point that Usopp wanted to go out on his own, their friendship prevailed and strengthened their bond to a higher new level.

There are even times when one of their crews is forcefully taken away by a strong enemy. Logically, the best thing to do is to move forward never minding about what happened. But in Luffy’s case, he does his best to bring back a lost “Nakama” even if he has to face the World Government.

He knows that his crew is the best and each of them earns a special place in his ship. In return, his Nakama gives their full loyalty to him.

That’s how leaders act sometimes when the situation calls. That’s what leaders do when caring for their friends.

4. Help other people along the way without expecting anything in return.

As the story progresses, the Strawhats would meet some other pirate crews, tribes or group of people who are in distress. They could have just left them and pursue their own dreams but they didn’t. What would happen is that they usually put their lives on the line just to save those people without expecting anything in return.

Is this applicable in our daily grind? Well, you can’t always be in a situation which calls you to lay down your life for someone. But what you can do is to help people or strangers who are in need. The Strawhats usually end up getting paid much more than what they’d contribute. And they became friends and allies with a bond  stronger than steel. Their connections all over One Piece universe is also wide. That is after helping people one episode at a time. 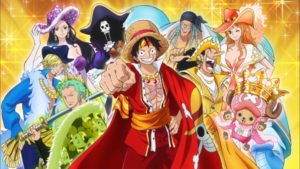 The sea is not always calm. The most dramatic episode of One Piece could be seen during Goin’ Merry’s farewell to the Strawhats. It was so intense that even I as an audience got carried away. It was also very painful to watch because they consider their ship as their “Nakama”.

Next would be Ace’s death in front of Luffy. Imagine your brother getting killed in front of you. That must have been really painful.

But these aching experiences only made them stronger than ever. It’s the same as life. There are those moments that we hit rock bottom and its really difficult to get over them. But if we learn to perceive the positive side of our predicament and focus on growth, the good will always surprise us with tremendous happiness.

To unlock our hidden potentials needed for our journey in life or businesses, we need someone who would guide us along the way. We have to accept that no matter how great we feel we are, it is always wise to empty our cup and be a disciple again. This happened to all of the Strawhats. After being butt-kicked by Kuma, they accepted their weakness and found mentors whom they believe knows more about their powers and who has been out there.

This is similar with us. Alone, we can only take ourselves to a certain level. But if we submit to a discipleship from someone whom we acknowledge better than us, we can soar to great new heights unlocking our potential along the way.

7. Do not be afraid to take on the big guys.

Every time Luffy faces a fight, it is always with someone who is way stronger than him. Some of his crew mates may falter but once he declares his intention, there is no turning back, come hell or high water.

But along the process, the big guys usually end up getting beat up. Luffy alone may not be enough to defeat him but with his team and allies, they can accomplish anything.

In our daily life or business, we sometimes encounter big problems or stronger competition. It could be intimidating if we focus on what the other side have that we don’t have. But if we start to take inventory of our own resources, the quality of our team and the efficiency of our teamwork, we can be confident in our performance and accomplish our goals effectively.

This is also one of the great reasons why I love One Piece. Aside from the epic fights, masterful story lines and surprisingly cool adventures, each character have their own fun side. They have this really strong swordsman but has no sense of direction. In other words, if you agreed to meet in the front yard of your house after two days, you will find him in a castle nearby hopelessly trying to find the exit. But he will be very early. Or there’s this romantic cook who prefers being killed by a lady than to lay a hand on her. A skeleton who likes seeing panties. A captain who eats everything that looks edible, even if it is poisonous. Put them in one ship together with other silly characters and you have a hell of a fun.

Your team could be unique and dead serious about your goals but it’s always helpful to inject gags that will lighten everyone’s mood. As what they always say, “Happiness is not the destination, it is the journey.” So sit tight, have fun and enjoy the process.